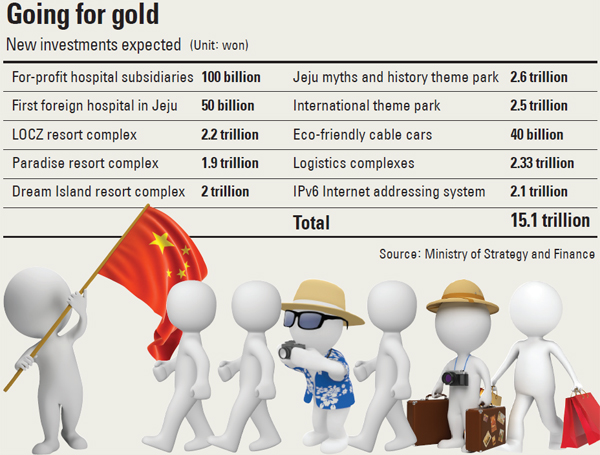 Concluding that manufacturing is no longer capable of pulling the economy out of its low growth, the government decided to relax a range of regulations in the services sector.

At the sixth trade and investment promotion meeting presided over by President Park Geun-hye at the Blue House yesterday, the Ministry of Strategy and Finance and other ministries came up with a total of 135 measures to improve seven major service industries: medicine, education, tourism, content, finance, logistics and software.

Sixteen of the measures will require revisions of related laws.

“Services are representative industries focused on domestic demand,” said Choi Kyung-hwan, deputy prime minister for the economy and finance minister, at the meeting. “High-quality jobs sought by young people are created in the services sector. It is urgent to foster growth of service industries in order to improve our economy’s productivity and overseas competitiveness.”

The government formed joint task forces among different ministries to oversee execution of policy measures for each of the industries, Choi said.

“We have infinite potential for becoming a services powerhouse,” Park said, “as we have world-class information technology, medical technology, competitive education, outstanding talents and so forth.”

The ultimate goals of the plan are to create 180,000 jobs, obtain 15.1 trillion won ($14 billion) in investments and attract 1.5 million foreign patients for medical tourism and 20 million tourists by 2017.

Significant parts of the plan are to raise the competitiveness of the medical industry by allowing foreign hospitals to operate here and helping Korean hospitals go abroad; to improve tourism infrastructure; and to allow foreign academic institutes to establish schools in Korea.

Locations for foreign hospitals will be Jeju, Songdo and other free economic zones.

The first foreign hospital in Korea will be Chinese, which the government plans to approve in September.

CSC, the Korean branch of China Stem Cell Health Group, plans to invest 50.5 billion won to open a six-floor hospital with a capacity of 48 inpatients in Seogwipo, Jeju, in 2015. The company submitted its plan last February to the Ministry of Health and Welfare, but approval has been delayed due to the absence of specific plans for the foreign hospital to equip itself with an emergency service system.

The hospital will provide dermatological and plastic surgery services that are popular among Chinese tourists.

Foreign doctors will be able to work at such hospitals with no limits on numbers. 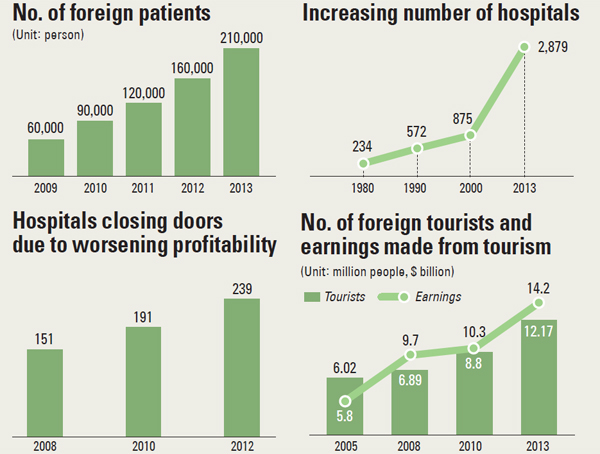 The government will also encourage local hospitals to create so-called meditels or other profitable side-businesses to help attract both foreign patients and tourists.

A meditel is a combination of the words medicine and hotel, which signifies hospitals providing medical services and accommodations in one building. Previously, only hospitals that had track records of attracting foreign patients were able to operate meditels, but this stipulation will be removed.

Sejong General Hospital in Incheon will start building a meditel next year.

Cheju Halla General Hospital in Jeju will establish a subsidiary to develop health beverages next year.

“Those promising service industries like medicine, tourism, finance and software should be open to the world and innovate through competition,” President Park said at the meeting. “If the creation of profitable corporations under hospitals make tangible achievements, this will serve as a momentum for pushing controversial remote medical services.”

For Chinese, the government will expand the current multiple visa system that is effective in Beijing and Shanghai to Guangzhou and Shenzhen.

The government wants to attract more Chinese tourists considering the rapid growth in the number of Chinese visiting Korea recently and the warm relations between the two countries after Chinese President Xi Jinping’s state visit to Seoul last month. The number of Chinese tourists jumped from 710,000 in 2005 to 4.33 million last year. For them, the government will create Chinese-language cable TV channels that introduce major tourism sites, shopping malls and historic sites of Korea.

For Mongolians, it will lift a current restriction on issuance of multiple visas. Kazakhstanis will be able to enter the country with no visa from later this year.

For the sake of all tourists, the government decided to improve infrastructure nationwide, including increasing access to the Han River, building shopping and cultural facilities in riverside parks and creating a second cable car, which should be environmentally friendly, on Mount Namsan.

It is the first time in 30 years that the government has decided to utilize the iconic river to boost tourism. The government found only 10 percent of foreign tourists visit the river for sightseeing because the river areas are not sufficiently developed. It will come up with a separate master plan for development of the river next year.

The government will also support the creation of large resort complexes with foreign investment.

“The new resorts will consist of casinos, hotels and convention functions, which will help attract foreign tourists significantly,” said an official at the Finance Ministry.

“The government will provide full and swift support for building the four resorts.”