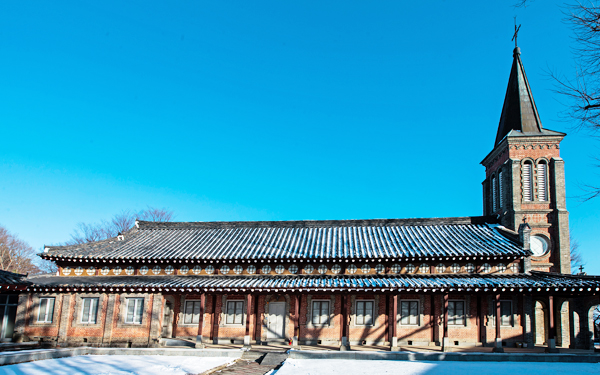 Nabawi Cathedral in Iksan, North Jeolla, the oldest cathedral in the Jeolla region, displays a combination of Western- and Korean-style architecture. [JoongAng Ilbo]

“Would you like a photo?” asked Joseph Kim, a tour guide at the Seosomun Martyrs’ Shrine in Jung District, central Seoul.

“Yes, please - me and my sister together,” a nun dressed in a gray habit replied with a smile, “as the Pope will be here soon.”

Seosomun Martyrs’ Shrine, where many Catholic missionaries and believers were persecuted, is where Pope Francis will start day three of his five-day visit to Korea, which begins tomorrow. Although each day of the tour has an importance of its own, day three is when 124 Korean martyrs will be beatified.

On a recent visit to the site, a group of people were giving the park surrounding the shrine a face-lift. A man sprinkled water across the grass and several women were planting flowers. There were also some men napping on the benches - a common sight in local parks.

Interest in Korean Catholicism’s sacred spots appears to have risen in recent days - or at least that is what the Korean Catholic community and district offices involved in the pope’s trip would like see happen.

In light of this, the Korea JoongAng Daily is highlighting some holy sites both inside and outside of Seoul to detail the history of Catholicism that these places have witnessed.

As listing all of the nation’s Catholic sites is impossible, locations Pope Francis will visit, easy-to-reach sites close to downtown Seoul, and areas famous either for their aesthetic beauty or historical importance have been given priority. 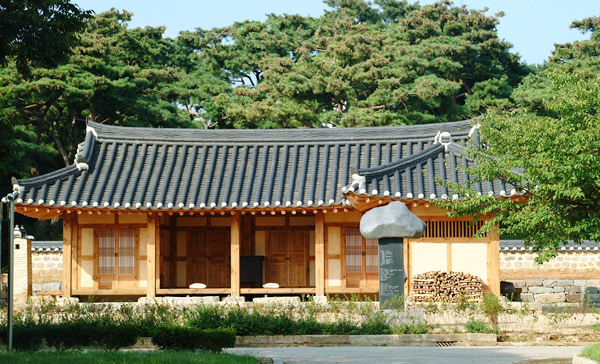 The area Pope Francis will be visiting on Friday is sometimes described as the Bethlehem of Korean Catholicism because it is where the country’s first Catholic priest, Kim Dae-geon (1821-46), was born and raised.

But this is not the only reason Solmoe is one of the most important Korean Catholic sites.

Kim’s father Kim Je-jun, great uncle Kim Han-hyeon and great grandfather Kim Jin-hu were all executed during the persecution of Catholics in the Joseon Dynasty (1392-1910) and they were all born and lived at Solmoe Sacred Place.

“You could say that this is where Kim Dae-geon formed his faith,” Father Jin Yun-gi, the director of the museum at Solmoe, said, “as he witnessed the lives of his father, uncle and grandfather in his young age.”

After having studied in Macau - a former Portuguese colony where many priests lived - Kim came back to Korea in 1845 and committed himself to undertaking missionary work in Yongin, Gyeonggi. Just a year later he was executed at the age of 26 at Saenamteo execution ground in today’s Seosomun area.

It was actually around 1906 that Korea’s Catholic community began working to turn Solmoe into a sacred site.

They bought land and erected a monument, but it was only in 2004 that they were able to restore the house Kim was born in and open a museum dedicated to him, with the help of the state and regional governments. 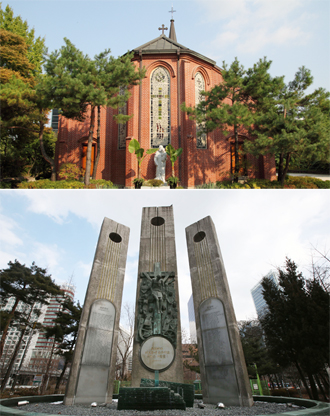 Seosomun, or West Small Gate, was one of the eight gates of the fortress that surrounded Seoul during the Joseon Dynasty.

The era’s people used the gate to reach Chilpae, a well-used marketplace during the period.

Its popularity is why the Joseon government chose the gate as an official execution ground in 1416, so that more people would witness executions and abide by the law.

Countless Catholic missionaries and believers died here during numerous rounds of executions. Among them, 44 martyrs were canonized en masse by John Paul II in 1984. This makes Seosomun the location that has produced the largest number of Korean saints as 44 of the 103 in the nation were killed on this very ground.

Jeong Yak-jong (1760-1801), a Catholic and the brother of the famous Korean scholar and government official Jeong Yak-yong (1762-1836), was executed in the Seosomun area. He said he wanted to die while looking up the sky, stories say, so this is how he was killed.

Jeong is one of the 124 that will be beatified on Saturday.

The Jung District office said earlier this year that it would refurbish the shrine by 2017 and build a museum there, among other plans.

“Although Seosomun Martyrs’ Shrine is the largest martyrs’ site in Korea,” said the tour guide Joseph Kim, “it has been overlooked for a long time and is filled with homeless wanderers.”

Not far from the shrine is Yakhyun Catholic Church, Korea’s first Western-style Catholic cathedral and Historic site No. 252. The Korean Catholic community chose the site as it overlooks Seosomun Martyrs’ Shrine. Having been completed in 1892, the religious building opened six years before Myeongdong Cathedral.

After 1790, for about 100 years, four major rounds of persecution took place in Korea and about 10,000 Catholic missionaries and believers were killed.

Among other execution grounds, Haemi in Seosan, South Chungcheong, is believed to have witnessed the most cruel killings.

Records state that outside the western gate of Haemi Fortress, “mountains of Catholic believers’ corpses and streams of their blood formed.”

According to historical records, in the 1866 Byeongin Persecution alone some 1,000 believers were killed on this very ground. And many of them died in extreme pain - buried alive in a hole, drowned to death in a well and killed in torturous methods not seen elsewhere.

The Haemi area, which the pope will be visiting on Sunday, is also called Yeosutgol by locals. Historians trace the root of this word to “Jesus,” which Catholic believers apparently uttered in final prayers before their painful deaths.

Haemi was located in a strategic place for Korea’s western sea defense, which is why the Joseon government constructed a fortress in the region in 1421.

As a result, along with Gochang Fortress in North Jeolla and Nakan Fortress in South Jeolla, Haemi Fortress was an important Joseon Dynasty defense system.

During its heyday in Joseon, the Haemi Fortress had a circumference of 1.8 kilometers (1.12 miles) and was five meters in height. It had three gates in the East, South and West and many structures within it. Records say that people of the Joseon period planted hardy orange trees near the fortress and used them for defense purposes.

Although the structures within it are all gone, the fortress itself is rather well-preserved and was thus designated to be Korea’s Historic Site No. 116 in 1963. It was in 1998 that Korean Catholics raised funds and bought land in the area. They built a cathedral in June 2003 to commemorate martyrdom. 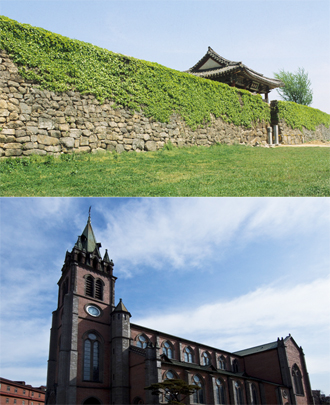 “Holy” is rarely a word used to describe the Myeong-dong area, a cluster of shopping centers and eateries. However, Myeongdong Cathedral, the Church for the Archdiocese of Seoul, is based here.

Designated Historic Site No. 258, it was the first parish in Korea.

The cathedral’s significance also extended beyond the Catholic community.

In the 1970s and 1980s, it was the main backdrop for Korea’s democracy movement and a shelter for student protesters.

Under the leadership of Lee Byeok (1754-86), one of Korea’s early Catholic followers, Korea’s first Catholic believers began meeting in the Myeongnyebang area, which encompasses today’s Myeong-dong, in the late 1780s.

A similar meeting took place in Cheonjinam in Gwangju, which is often described as the birthplace of Korean Catholicism, even though it happened years after the Myeongnyebang meeting.

In 1883, French Catholics purchased land in the Myeongnyebang area after a treaty signed between Korea and the United States in 1882 made it possible for foreigners to purchase land in Korea.

French Bishop Marie Jean Gustave Blanc (1844-90), who led the construction, wrote in a report to his home country: “Men - young and old - came to work for days free of charge, braving the cold. The only things that warmed their frozen hands were faith and satisfaction.”

Construction was stalled due to disputes with the government over issues such as ownership and the death of Father Eugene Coste (1842-96), the Frenchman who had designed the building.

The Gothic cathedral was finally completed in 1898.

The year 1866, or the year of Byeongin, was a bad time for both Korea and France.

French Catholic missionaries began arriving in Korea in the early to mid-19th century.

It is widely believed that the first French missionary to come to Korea was Pierre Philibert Maubant (1803-39).

The Daewongun, a keen advocate of Korea’s isolationist policies, was trying to shut Korea off from Western influences.

About 8,000 Catholics, including nine French missionaries, were executed by the Joseon government in 1866 on a cliff overlooking the Han River in today’s Mapo District.

The corpses were thrown into the water.

“As Catholicism was introduced in Korea and there were several rounds of persecution, Joseon accepted the religion to some degree,” said Kim Yang-kyun of the Seoul Museum of History.

“However, as Russia expanded its forces southward, Heungseon Daewongun felt threatened and conducted Byeongin Persecution as a way to scare off the Russians.”

Russia had taken over an area of China and there were fears that its forces would head to Korea.

The French missionaries might have come to Korea to spread peace, but their deaths ironically led to the infamous 1866 French campaign against Korea, known here as Byeongin Yangyo, as the French government sought retaliation.

The martyrs of the Byeongin Persecution are commemorated at the Jeoldusan Martyrs’ Shrine and Museum near Hapjeong Station.

The site consists of a history museum, monuments and a cathedral that holds regular masses.

Important figures in Catholicism, including Mother Teresa and Pope John Paul II, visited the area while on trips to the country during the 1980s. 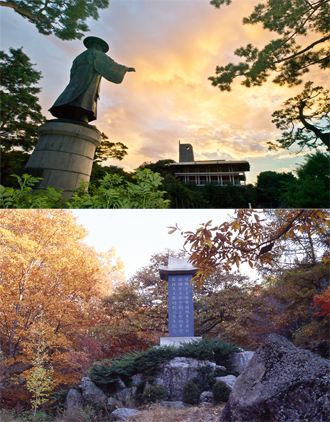 For its scenic beauty, Cheonjinam is a favorite weekend getaway in Korea. As Jeong noticed, the place is known to be particularly spectacular during the fall.

However, the very area is also noted as the birthplace of Korean Catholicism. Joseon elites who were ousted from mainstream politics during the late 18th century gathered in Cheonjinam to study Neo-Confucianism, the state religion at the time.

However, one winter night in 1779, the meetings took a different turn.

“Lee Byeok joined us in the middle of the night and we stayed up all night to discuss the [Catholic] scriptures,” Jeong described in an epitaph he wrote.

It was customary at the time for scholars to write epitaphs.

“Seven years passed and critical opinions have been formed against Western Learning. As a result, such an amazing debate cannot be held ever again,” Jeong lamented in the epitaph.

What’s notable, historians say, is how the scholars at the meeting were able to have a long debate about Catholicism without preparation.

According to historical documents, they were already quite familiar with the religion through materials and information coming in from China.

Another interesting detail is that Cheonjinam used to house a Buddhist temple.

It is believed, however, that when Jeong and Lee were holding their academic and religious meetings, the temple was no longer there.

This is understandable given that Buddhism was a state religion during the Goryeo Dynasty (918-1392), but when the ensuing Joseon Dynasty chose Confucianism as its ruling foundation, many Buddhist temples were closed.

Korea’s Catholic community, led by the Suwon Diocese, developed Cheonjinam into a sacred site between the 1970s and 1980s.

During those years, the tombs of Korea’s early Catholic believers were moved to Cheonjinam, including those of Lee Byeok and Jeong Yak-jong.