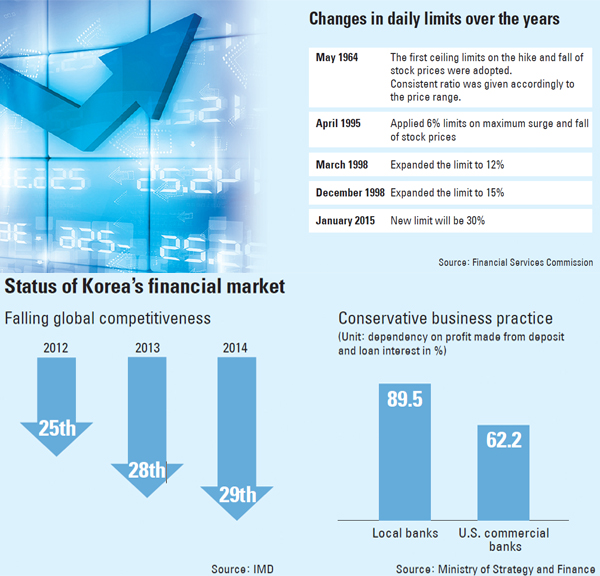 One of the biggest changes in the stock market starting next year will be the expansion of the stock price daily trading limit from 15 percent to 30 percent.

The expansion of the daily limit is part of the government’s plan to step up competitiveness of the service industry announced yesterday.

When the new regulation takes effect next year, it will be the first change in the market’s daily limit in 16 years.

When a stock rises or falls 15 percent compared to the previous day’s close, transactions are halted. The limit system was first implemented in 1964 and was gradually raised to 15 percent in 1998.

The practice is not used in other major stock markets such as the New York, Tokyo, Hong Kong and Singapore exchanges.

The idea was first pitched by the nation’s stock market operator Korea Exchange at the end of 2012, but was shot down by the financial authorities, which said it was too early to expand the daily ceiling.

But what has caused the change of heart a year and a half later?

The government’s goal is to reinvigorate the stock market, which has been stuck in certain range.

Although the economy in 2014 is expected to post its strongest growth of the past three years at 3.8 percent, concerns have been growing over a spreading negative mood that could be a drag on growth.

Fears of reduced growth have grown further since Koreans drastically cut their consumption after the sinking of the Sewol ferry, which claimed the lives of more than 300 passengers and crew.

Choi Kyung-hwan, who took the helm of the Ministry of Strategy and Finance in July, recently warned Korea could be stuck in a long-term recession unless action is taken.

As part of its stimulus program, the government hopes the expanded daily trading limit will attract retail investors and boost the stock market, which could increase household income and on a larger scale expand economic growth through larger spending in the stock market.

The nation’s stock market has been losing its appeal, particularly among local retail investors, as it has been stuck in a fixed range between 1,880 and 2,080.

According to the Korea Exchange, the biggest market movement this year was 10.4 percent. The highest point reached by the main bourse was on July 30, when it closed at 2,082.61 while the lowest was on Feb. 4 when it closed at 1,886.85.

Despite low interest rates, which normally drive investors to relocate their capital from bank deposits to purchase assets including property and stocks, investors held on to their deposits due to the limited volatility of the stock market and the frozen real estate market. As uncertainty over economic growth spread, the stock market was stuck in a vicious cycle where its movement has been further limited as more investors pulled out.

According to the Bank of Korea, as of May, floating capital is at a record high of 725 trillion won ($705 billion). Not only is this a nearly 20 trillion won increase compared to the end of last year, it is also an increase of 67.6 trillion won since the end of 2012.

This means investors are struggling to find places to put their money in order to capitalize on it.

In fact, total transactions on the Kospi shrunk by nearly half from a year ago in the first half from 4.5 trillion won in 2013 to 2.9 trillion won this year.

“The goal is to make the stock market more dynamic while creating an environment where the value of a company is properly evaluated,” said Lee Hyun-chul, capital market bureau director at the Financial Services Commission.

“As there have been limits on how much a stock could rise or fall in a day, there were problems where speculators could artificially raise or drop a stock price to its daily limit even with a few transactions at the last minute before the market closes,” Lee added. “If we expand the ceiling, it will be harder for such manipulators to adjust the price artificially.”

The only brokerage house that saw its stock price fall from Monday’s was Mertiz Securities.

The daily trading change is expected to improve the earnings of brokerage firms, which have been suffering this year as retail investors have been reluctant to make investments in the local market.

While many welcome the decision to increase the daily trading limit, saying it will undoubtedly draw in investors, there are concerns that such volatility could lead to speculation that could manipulate the market.

“The limit change will hardly affect leading blue chips like Samsung Electronics or Hyundai Motor, which hardly plunge or spike to the daily limits,” said a brokerage firm analyst.

“The problem could come at small and midsize companies’ stocks, which are more vulnerable to manipulation as the wider range on the daily limits will have a stronger impact on these companies as well as the overall stock market.”