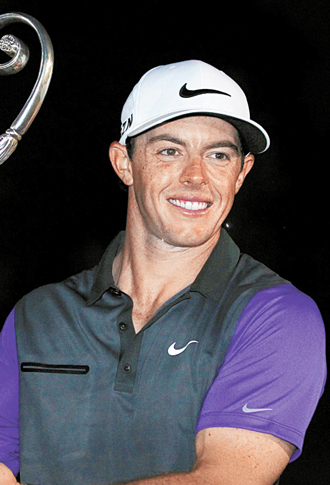 Talk of the “Tiger era” being replaced by a “Rory era” escalated after Rory McIlroy thrust himself into golf’s pantheon of greats by clinching his fourth major title at the 96th PGA Championship on Sunday.

While Tiger Woods ended a disappointing week at Valhalla Golf Club by missing the cut at a major for only the fourth time as a professional, McIlroy won his third consecutive tournament with a dazzling display of shot-making down the closing stretch.

The Northern Irishman overcame a scrappy start to triumph by one stroke after a final-round shootout on a rain-softened layout ended in near darkness, and the superlatives were once again being heaped upon the 25-year-old from Holywood.

“I said to the boys at the [British] Open, I didn’t think we were going to see the new Tiger era, as in someone creating their own kind of Tiger-esque era just yet.

“I’m not eating my words, but I’m certainly starting to chew on them right now, with the WGC [Bridgestone Invitational win] and another major this weekend. When the kid is playing well, he’s pretty tough to live with. Pretty special stuff, yeah.”

McIlroy himself is wary of any hype that golf could now be entering a “Rory era” of individual dominance.

“I try and put all this talk aside every time it comes up,” he said after becoming the fourth youngest player to land four majors, with only Tom Morris Jr., Jack Nicklaus and Woods ahead of him.

“Tiger and Jack are two of the most successful players in our sport of all time. I’m on a nice track at the minute. I’ve still got a long way to go, but to be in their company at this age is very special.”

His ability to blow away fields, as he did in winning the 2011 U.S. Open and the 2012 PGA Championship by eight shots apiece, or to conjure something extra special when needed, as he did on the back nine at Valhalla, marks him out as a great.

McIlroy is taking great pains, though, to adopt a midterm career strategy instead casting his eyes too far into the future.

“I’ve got to take it one small step at a time,” he said. “I think the two next realistic goals are the career grand slam, and trying to become the most successful European player ever.

“Nick Faldo, [the] most successful European ever in the modern era, has six majors. Seve [Ballesteros] has five.”

McIlroy would complete a career slam of all four majors if he can win the Masters at Augusta National, where he led by four shots going into the final round in 2011 before he tumbled out of contention with an nightmare-closing 80.