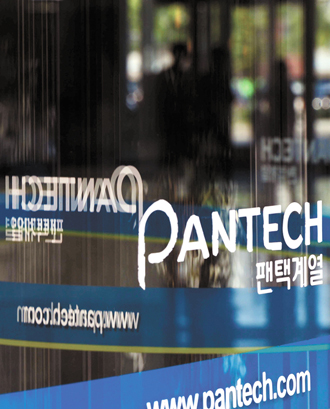 The Pantech logo on the door of the smartphone manufacturer’s headquarters in Sangam-dong, western Seoul. Pantech finally filed for court receivership after mobile carriers refused to buy the company’s phones. [NEWSIS]

Pantech finally filed for court receivership after the company could not overcome its financial difficulties and after three telecommunication companies denied its request to order additional smartphones.

The board of directors of the cash-strapped company, consisting of three internal directors, including CEO Lee Joon-woo, and an external director resolved to file for court receivership at Pantech’s headquarters in Sangam-dong, northern Seoul, yesterday.

The nation’s smallest smartphone manufacturer could not pay receivables worth approximately 50 billion won ($48 million) and failed to pay salaries to employees last month.

According to the notice, Pantech planned a turnaround after the three mobile carriers - SK Telecom, KT and LG U+ - agreed to extend the grace period for debt repayment, totaling 153 billion won, for two more years and its creditor banks also approved measures such as an equity swap.

However, without a new injection of capital or a demand for smartphones from carriers, Pantech decided that the turnaround was impossible.

The Seoul Central District Court will decide whether it will accept the court receivership application within a month, after freezing all bonds and debt obligations in a week.

If the court accepts the application, the company will be given new management to attempt revival.

If the court rejects the application, Pantech will have to face liquidation.

Industry observers expect the court to accept the application.

“During the court receivership process, even if we face difficulties, we will make every effort to normalize management as soon as possible by gathering all the capabilities that we have,” wrote the CEO in the notice.

“In the corporate rehabilitation procedures, we will not neglect our efforts in minimizing the inconvenience to Pantech’s customers as a priority.”