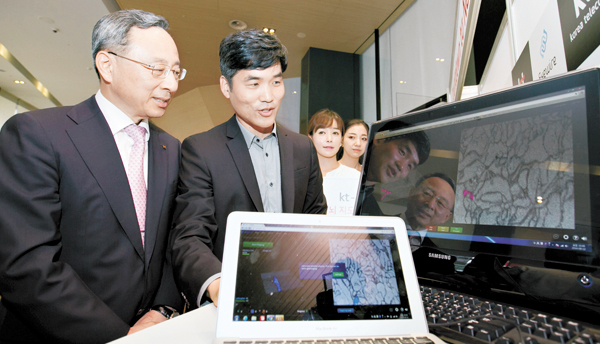 KT, the No. 2 mobile carrier in Korea, said yesterday it will participate in the Human Connectome Project, which aims to map the brain’s neuron structure in cooperation with Sebastian Seung, professor of neuroscience at Princeton University.

The Human Connectome Project is a comprehensive map of neural connections in the brain.

KT is the first company in the world to participate in the project, which is considered one of the largest scientific endeavors since the human genome mapping project, as it studies the architecture of 100 billion neurons in the brain.

KT will sponsor the brain-mapping game EyeWire developed by Professor Seung so that Korean gaming aficionados can directly participate in mapping the brain.

The company also wants to get more involved in the health care industry by utilizing information about the brain and how it relates to communication technology.

“EyeWire is a game I developed to map the 3-D structure of brain neurons,” said Seung at a press conference at KT headquarters in Gwanghwamun, central Seoul, yesterday.

“Anyone can play, even without a scientific background, to help the EyeWire team based at the MIT Lab. About 140,000 people from 145 countries are playing already.”

Together, the players map the 3-D structure of neurons, advancing neuroscience by helping researchers discover how neurons connect and network to process information.

“What players have to do is to basically color the branches of a neuron from one side of a cube to the other,” Seung said.

“It’s like coloring exercises that we used to do when we were young. Except since it’s 3-D, it takes a little more effort.

“If you think of it as a 3-D puzzle, you can scroll through the cube and reconstruct neurons in volumetric segments with the help of an artificial intelligence algorithm.”

As it is an online game, there are also social elements such as chatting and competition between players.

“At this speed, it is expected to take around two years to reveal the rest of the 263 neuron structures,” said Seung. “However, I believe the time could take so much less if Korean people were participating in this meaningful online game.”

The professor called the exercise a “countdown to neurotopia.”

More players on the game mean faster processing of data.

While the game seems difficult to understand and play, the professor said hard-core gamers are finding it addictive.

As the world’s first sponsor of EyeWire, KT Chairman Hwang Chang-gyu said KT will provide ICT infrastructure and marketing channels so that Korean citizens could participate in playing EyeWire.

First, the mobile carrier will help Korean users play the game by translating the English-based online game into Korean.

In addition, it will develop multi-language chatting channels for players to communicate with each other during the game. Currently, users from around the world use English.

Other roles of KT include appointing honorary ambassadors of EyeWire among Korean university students, holding EyeWire competitions for college students nationwide and rolling out various promotional events on social media.

“By utilizing communications service infrastructure and SNS, we will encourage many people to participate in the brain study and spread the good news through collective intelligence,” said Chairman Hwang.

“Based on the data collected by EyeWire game players, we will continue to gear up our effort to realize a healthy and happy life for mankind through ICT in the health care business, one of the five future-converged services.

“We expect to accelerate resolving incurable diseases such as cancer and brain disorders by actively participating in the DNA and brain studies, which are uncharted areas.”