Sinking will ‘be laid bare,’ spokesman for victims says

Sinking will ‘be laid bare,’ spokesman for victims says 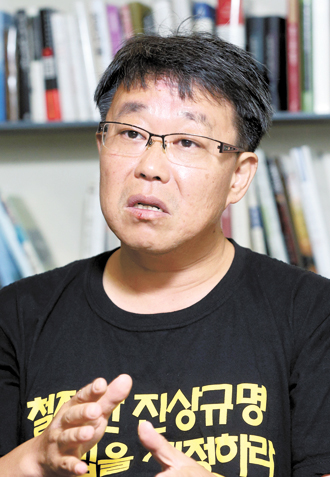 Yu Gyeong-geun, A spokesman for the bereaved families of the Sewol victims.

Following the opposition New Politics Alliance for Democracy’s call for the ruling Saenuri Party to return to the negotiation table, consensus on the passage of a special Sewol law has once again reached a stalemate. The move stalls the agreement that was reached by the two sides on Thursday, as families of the Sewol ferry victims continue their hunger strike at the National Assembly and Gwanghwamun Square.

Today marks the 31st day since the distraught family members went on a hunger strike, calling for the two parties to reach an agreement on a special law whose terms would include the families’ demands. The families have demanded that the fact-finding committee to be established under the special law be empowered with the authority to investigate and indict the suspects alleged to be responsible for the Sewol’s sinking. The disaster, Korea’s worst maritime accident, left more than 300 people dead, mostly high school students.

The families also want to give the fact-finding committee the authority to recommend a special prosecutors’ investigation team. Those conditions are opposed by the ruing party. The Saenuri’s stance on denying the terms demanded by the families was only strengthened following its landslide victory in the July 30 by-elections.

Below is an excerpt of an interview with Yu Gyeong-geun, a spokesman for the victims’ relatives, who has also been on a hunger strike in front of the National Assembly. The interview was conducted last week at the JoongAng Ilbo’s office.

Q. Do you think going on a hunger strike is the only way to make your voice heard?

A. Of course we [the families] thought about that over and over again. Before a special parliamentary hearing on the Sewol disaster, both ruling and opposition lawmakers promised that this was a nonpartisan matter and that the investigation should be conducted regardless of political positions. They affirmed this promise many times, so we had high hopes for the special law. But as they began negotiating on the specifics on the law, they totally flip-flopped. There was so much deviation from what they told us and what they discussed in their talks for the special law.

Can you be more specific about the gap in the lawmakers’ position?

We want to see our demands discussed by the two parities at the negotiation table, especially given the fact that we petitioned for the special Sewol law with 3.5 million signatures we collected. To see our demands realized, we requested a three-way talk involving the two parities and the association of the victims’ families. But our request was rejected. Then we requested to watch the negotiation in the back of the room, but that was also rejected. We decided to go on a hunger strike because we thought our demands would never be discussed in such a situation.

How long are the families planning to continue their hunger strike?

We will continue the hunger strike until the special law gets passed.

Can you talk about the day when the Sewol ferry sank?

As soon as I heard the news about the sinking, we drove to Jindo. I got there at around 2 p.m. and there were already some kids who had been rescued from the ship. I could not see my daughter among those children so I asked her friends. They told me she was on a bus coming to the Jindo gymnasium. A few minutes later, three buses arrived at the gym and I scoured the place for my little girl. But Ye-eun [Yu’s daughter] was nowhere to be found.

Ye-eun’s friend told me that she must have been rescued because Ye-eun was right behind her in a line waiting to jump off the ferry. But it was later discovered after analyzing video clips that the ferry tilted more toward the water when it was Ye-eun’s turn to be rescued, flooding the ship.

It must have been heart-wrenching watching the rescue efforts under way in the first few days of the accident.

It was a total nightmare for the first four days, during which I ate nothing. I couldn’t even sit, and it was the same for every other parent [encamped in the Jindo gymnasium]. In the first few days, the Coast Guard did nothing in its rescue efforts, even when the parents wailed and screamed for them to do something. The authorities told us they were doing their best and asked us to wait a little longer. Each day when I went to the site of the sinking, there was absolutely no rescue efforts going on whatsoever. But at Paengmok Harbor, the authorities told [the parents and the media] that they were doing their best.

What do you think the investigation will tell us?

How the government and rescue authorities responded to the sinking from April 16 to April 19 must be laid bare. That will be the core of the probe.

Some say that was already made public.

Some facts have been uncovered. But that’s only a fraction of the whole picture. The problem goes back to the day when the Sewol sailed from Incheon. While all other ferries canceled their departures, the Sewol’s captain decided to take off when every other crew member said it was too risky. Then when the ship was sinking, only the crew members escaped from the ship. Coast Guard officials who arrived at the site did not engage in full rescue efforts. Divers did not dive. There are at least hundreds of people implicated in this dubious unfolding of events. We think the right judgment of one man could have stopped all of this. We have no choice but to question that there was something behind it that we do not know yet that caused this calamity.

The relatives must have been disappointed in the outcomes of the July 30 by-elections.

Yes, not because we support the opposition party necessarily, but because we judge that the opposition is more likely to listen to our demands and apply them to the special law. But we are not discouraged by the elections. This is going to be a long-term process.

The Saenuri Party opposes the families’ demand to empower a fact-finding committee with the authority to investigate and indict suspects because it would shake the fundamentals of the judicial system. The ruling party also alleged that the committee will not be capable of conducting a fair investigation, as some of its members would be chosen by the victims’ relatives. The families, on the other hand, say that is the only way to get to the bottom of the case. They say a special prosecutors’ team appointed by President Park Geun-hye will not be able to conduct an impartial and thorough investigation that can potentially go after presidential staff at the Blue House.

What do you want to say to the public?

We are going the long way in reaching our goal because that’s what our beloved children in heaven want us to do now. Making a safer Korea by getting to the bottom of the sinking and holding those responsible accountable is the mandate given from our children in heaven now. If we fall short of accomplishing that mandate, we would be ashamed to see our children again. But the obstacles [to find the truth] are too high and strong. We need help from the people, and that is to remember the Sewol disaster. We want to open a chapter that will make Korea a safer place to live. I am sure that our children in heaven are cheering for us now.