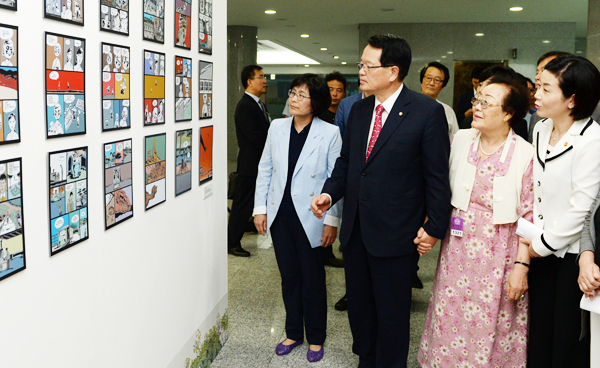 The former United Nations special rapporteur on violence against women expressed concern recently that the Japanese government “seems to have gone back to a very hard-line position” that existed before 1995 in regard to the issue of sexual slavery during World War II.

Radhika Coomaraswamy, who served as UN special rapporteur from 1994 to 2003, is behind the landmark 1996 report that demanded the Japanese government apologize and compensate its victims for its Imperial Army’s forcible recruitment of girls and women into military brothels, known as comfort stations, before and during World War II.

The monumental report is still referenced today by civil rights organizations, governments and key experts as an in-depth and comprehensive study on the issue.

“I think it is disingenuous,” said the 61-year-old lawyer and human rights advocate on Saturday in an interview with Korean reporters at her home in Colombo, Sri Lanka, referencing the Japanese government’s claim that there is no evidence proving that the women were coerced. 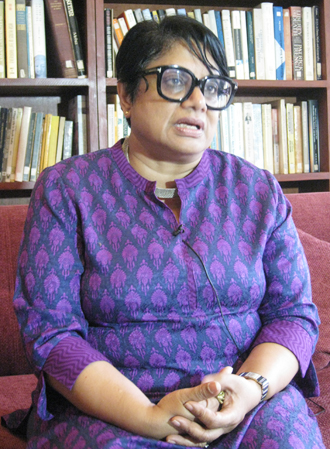 Despite positive steps taken since her report, she said, “recent statements [from the Shinzo Abe Administration] seem to be a step backward.”

Next year marks the 70th anniversary since the end of World War II, and nearly 20 years have passed since Coomaraswamy conducted the field investigation on sexual slavery at the hands of the Japanese military.

Earlier this year, the Abe administration launched a probe into the 1993 statement by Yohei Kono, who was then Japan’s chief cabinet secretary, in which he apologized to the victims, who are euphemistically known as comfort women.

In June, the investigative committee concluded in its “re-examination,” stating that the wording of the 1993 Kono Statement was a result of backwater negotiations with Seoul, and that there was no documentary evidence proving the women were forcibly recruited.

Seoul and the international community have interpreted this as an attempt by the Abe administration to undermine Kono’s apology and acknowledgement.

“The Japanese military was actually involved in the recruiting, and the premises were within the army encampment. So this is very different to a brothel near the army,” said Coomaraswamy, who also served as the under secretary general of the UN’s Special Representative for Children and Armed Conflict from 2006 to 2012.

Brothels, she clarified, are run by private companies near an army encampment and are common in wartime. She added that even in some instances in which there were private recruiters, “it was the [Japanese Imperial Army] that asked them to do the recruiting.”

“My report, based on interviews with the comfort women and also through looking at historical material on this issue, as well as interviews with Japanese women’s NGOs, makes it very clear that it was mostly coercive,” she said. “If you don’t want my report, then there is McDougall, who wrote another report as part of a sub-commission on this issue a few years later also came to the same conclusion. All the leading human rights NGOs in the world have found evidence of coercion.”

Coomaraswamy was referring to Gay McDougall, a special rapporteur of the UN human rights subcommittee, who wrote another key report in 1998 calling out the Japanese government’s legal liability in employing “physical violence, kidnapping, coercion and deception” to procure its victims during the war.

Coomaraswamy visited Pyongyang, Seoul and Tokyo in July 1995, the 50th anniversary of the end of World War II, for an in-depth study on military sexual slavery in wartime, just ahead of the 1996 report. Japan continues to argue that all claims arising from its occupation of Korea were settled in the 1965 bilateral treaty between the two countries. Coomaraswamy’s report pointed out “that the 1965 treaty only regulated property claims and not personal damages.”

In the Jan. 4, 1996, report, Coomaraswamy urged the Japanese government to make a public apology to the victims, accept legal responsibility, implement education to reflect history and punish, if possible, the perpetrators of the recruitment and the institutionalization of comfort stations during World War II.

“They actually showed me the marks of brutality on their bodies. So it was not a case of consensual [intercourse],” said Coomaraswamy, who recollected meeting with the victims in their homes. “They were physically hurt. Many of them were not married.”

Coomaraswamy added that being a woman made it easier for the victims - then in their 70s and 80s - to open up to her.