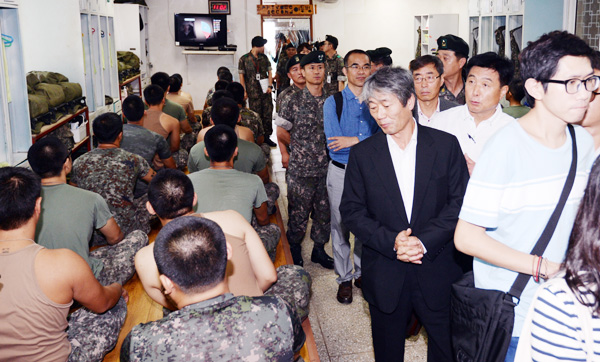 Members of a military culture reform committee yesterday visit barracks of the artillery unit of the 28th Division where Pfc. Yun was beaten to death in April. [NEWSIS]

Two corporals from the Army’s 28th Division, the same division in which a 23-year-old private was fatally beaten by his superiors in April, committed suicide together while on leave in Seoul on Monday night, the Army and police said yesterday. Both were classified as “soldiers requiring special attention” because they hadn’t adjusted psychologically to the military.

The suicides are bound to sharpen the spotlight on how the military deals with troubled young men, especially in the front-line 28th Division, which operates in isolated bases in Yeoncheon on the far northern border of Gyeonggi.

The corporals - both surnamed Lee, aged 23 and 21 - were found dead at the older Lee’s apartment in Dongjak District, southwestern Seoul, at around 10:30 p.m. Monday.

They hanged themselves from a laundry poll on a veranda and were discovered by the elder Lee’s sister, who reported the deaths to the police.

There was no suicide note, but the younger Lee left a message on a notepad app of his smartphone that read, “I won’t give a long message. It’s been too difficult so far. Sorry.”

He also mentioned the name of his superior officer with a profanity.

Having trouble adjusting to their compulsory military duty, both were already undergoing psychological counseling. The elder Lee was classified as a soldier in need of Grade B attention, whereas the younger Lee needed Grade A attention, which made him a more severe case. The younger man had a record of attempting to desert from the Army last November.

“It is true that both Lees were categorized as being in need of special care,” said Lt. Col. Lee Jun-beom in a briefing. “The exact cause of the incident will come out only after an investigation.”

Another Army official said the two men did not appear to have direct ties with the fatal physical abuse of a private from the same division who died in April and whose case was originally covered up.

The 23-year-old private surnamed Yun died on April 6 after being beaten and sexually humiliated by his superiors in the barracks, according to the Center for Military Human Rights, a human rights group. For weeks, the Army said he died after choking on food.

An Army investigation team is looking into whether there was any abuse or violence imposed on the Lees or whether they were being investigated as bullies themselves. In the wake of the Yun scandal, the Army is cracking down on bullies and some fear the crackdown could be too brutal.

The two corporals showed a history of counseling in the military. A personality test taken on May 2 by the elder Lee, who transferred to the 28th Division last October, showed he had the potential to kill himself. He went through several rounds of therapy and counseling at his unit since the test.

The younger Lee moved to the 28th Division last September and the Army went so far as to consider discharging him because of his psychological state in June. He had confessed to suicidal thoughts.

But his mother opposed the plan and encouraged her son to stay on. There is a tendency in Korea to believe mandatory military duty is an opportunity for men to “develop as adults in a true sense” and to “be ready to advance into society.”

The 28th Division has been mired in scandals for decades. In 1985, a private surnamed Park randomly shot fellow soldiers after his superiors abused him. He was executed. A private first class surnamed Kim went on a shooting spree at a guard post in 2005 that killed eight and injured four. He was sentenced to death but still remains behind bars because Korea stopped executions in 1997. In 2012, an armed military officer ran away from the division to Jangseong, South Jeolla, 350 kilometers away, and shot himself to death.

The 28th Division was initially established in Nonsan, South Chungcheong, in November 1953, four months after the 1950-53 Korean War armistice agreement. Following four relocations, it settled in the current spot in 1966, covering the demilitarized zone of the mid-western front in the Yeoncheon area.

Experts point to the work environment as a main reason for its frequent troubles. Due to its isolated location on the front line, groups of soldiers in small numbers are physically isolated and are under severe stress from having to stand guard near the border.

The soldiers also guard the Imjin River as its military demarcation line. The fact that they operate in small groups makes it hard for the commander to monitor and take care of each soldier.

“All soldiers operating at front-line divisions have a high level of stress, but the 28th Division has gone through numerous operations to capture spies, which makes it even more stressful,” said an Army official familiar with the division.

The division’s location in the middle of a plain has allowed infiltration of North Korean spies and soldiers. The division shot to death 63 spies in 44 operations in its 51-year history.