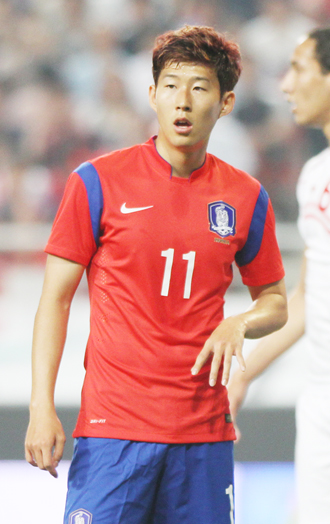 Korea’s best winger, Son Heung-min, will not play in the 2014 Incheon Asian Games that start next month.

The Korea Football Association (KFA) said in a press release yesterday it had been notified by Bayer Leverkusen of Germany that the Bundesliga team will not release Son to play in the Incheon Games due to a busy league schedule.

After an initial rejection by the German team, the KFA asked Leverkusen to allow Son to play when Korea advances to the Round of 16, but was rebuffed again yesterday morning.

“Leverkusen informed us it can’t send him for an event that is not on FIFA’s calendar,” the KFA said.

The Asian Games are not recognized by FIFA regulations, which stipulate that teams can only send players to the World Cup, A matches and events organized by the Asian Football Confederation such as the Asian Cup.

“I’m sorry about the decision,” said Lee. “The only good thing is that it was made before I announced the final roster.”

Lee and the KFA previously said they might add Son to the final roster, then wait for Leverkusen’s decision if the German team failed to respond by today.

When Leverkusen visited Korea for a friendly match with FC Seoul in late July, Lee was optimistic that Son might join the national team because he was informed by the KFA that Leverkusen officials had seemed positive after they understood the importance of the Asian Games, not only for Korea but also for Son. For Korean men, a gold medal would mean more than glory: it would exempt them from the mandatory two years of military service.

Leverkusen President Michael Schade, however, said in an interview with the German tabloid Bild on Tuesday local time that the team could not release one of its core players at the start of the Bundesliga season, which begins prior to the Incheon Asian Games. Preliminary rounds get under way Sept. 14, five days before the opening ceremony.

If Son were to play in Incheon, he could miss more than five Bundesliga matches, and Leverkusen is scheduled to play UEFA Champions League playoff matches against FC Copenhagen of Denmark on Aug. 20 and 28 and, depending on the result, possibly others in early September.

Since Son won’t be in Incheon, Lee Myung-joo of Al Ain FC in the United Arab Emirates has been mentioned as an alternative. But since the midfielder is 24 years old, the KFA would have to use one of its three wild cards. Only players aged 23 or under are eligible to compete in the Asian Games, but wild cards allow each nation to pick three players over the age limit.

Lee moved to the Emirates in last summer’s transfer market from the Pohang Steelers after having five goals and nine assists in 11 matches. As a central attacking midfielder who can also play the sides, Lee was a key to Steelers Coach Hwang Sun-hong’s attack strategy. He adapted well to his new team, with two assists in a friendly Cup match in July. He also is familiar with Kim Seung-dae and Son Joon-ho, who are expected to be on the Asian Games squad, as they played together on the Steelers’ youth team and at Yeungnam University.

Another possibility to replace Son is midfielder Shin Hyung-min of the Jeonbuk Hyundai Motors.

The two other wild cards are expected to be used for 196-centimeter (6-foot-6) striker Kim Shin-wook of the Ulsan Hyundai Tigers and his teammate, goalkeeper Kim Seung-gyu.

“Not having Son, who scored more than 10 goals in each of the past two seasons in the Bundesliga, is a huge loss for the coach, but he now has to shake it off and try to focus on developing a stronger squad,” said analyst Shin Mun-sun. “Talking about someone who isn’t going with the team to the event isn’t helpful.”