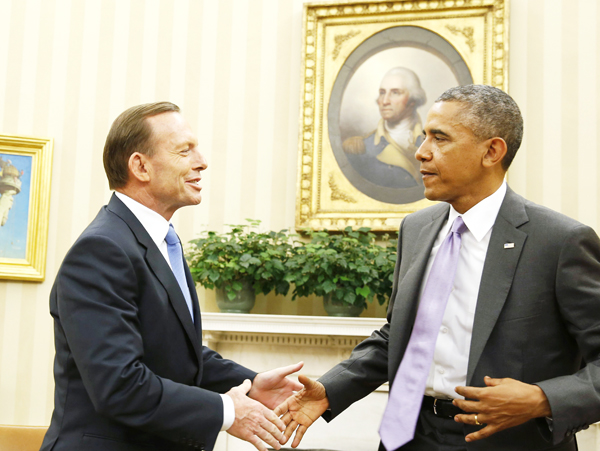 U.S. President Barack Obama speaks to Australian Prime Minister Tony Abbott during their bilateral meeting in the Oval Office at the White House in Washington on June 12. [REUTERS/NEWS1] 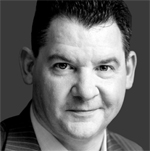 A jobless rate in Australia that surpasses the U.S. level may not seem like a problem for Federal Reserve Chair Janet Yellen and European Central Bank President Mario Draghi. But it may be a sign of the overconfidence that affects central bankers everywhere.

Folks in “The Lucky Country” have long been blessed with top-notch monetary policy makers. There has been no recession on the watch of Reserve Bank of Australia Governor Glenn Stevens or under his predecessor, Ian Macfarlane, who served from 1996 to 2006. Stevens, though, is perilously close to making the kind of policy mistake that’s been so rare at the RBA. On Aug. 5, he opted against cutting interest rates for a 12th consecutive month. Two days later, the jobless rate rose to 6.4 percent, the highest since 2002, compared with 6.2 percent in the United States.

There are ample examples around the world of central banks that tilted toward restraint even as deflation was a greater risk than inflation. At the Reserve Bank of New Zealand, Governor Graeme Wheeler increased rates four times between March and July and has since paused amid concerns he might have gone too far. Draghi, at the ECB, has been far less hawkish than his predecessor, but it sure took long enough. Yellen is battling pressure to end the quantitative easing program that is ensuring stable growth.

“Led by a shift in the Fed outlook toward a potential earlier start to tightening, major central banks are showing a confidence in the global recovery that may once again prove to be overly optimistic,” says Simon Grose-Hodge, head of South Asia investment strategy at LGT Group in Singapore.

The biggest risk to Australia - a weaker Chinese economy - may soon be the world’s, too. A slower pace of gross domestic product is assured as President Xi Jinping reins in a credit bubble and weans the economy from exports. There’s growing alarm about a fast-spreading property slump around the country, which is already beset by ghost cities. In the first half of 2014, home sales fell 9.2 percent from a year earlier.

In Australia, Prime Minister Tony Abbott’s austerity push seems at odds with global trends, and with the experience of many Australian households and businesses. As China’s demand for Australia’s iron ore and coal cools, the economy may quickly find itself in need of a lift. The bad news from China may also be affecting Australian consumer confidence, which in May fell to the lowest since August 2011.

As I have written, Abbott needs to be diversifying the economy toward growth engines that rely less on China. That means increased investments in infrastructure, education and training to increase competitiveness. Yet Abbott and Treasurer Joe Hockey are moving in the other direction, showing excessive concern about a rather modest budget deficit. The drag from Abbott’s fiscal priorities puts the onus on the central bank.

Stevens and his team are best placed to offer support in the short run. Yet the RBA’s optimism may be misplaced as China slows and Australia’s economic luck runs out.

“The mantra remains that monetary policy is doing what it can and as such what would have been a justifiably dovish tone was not forthcoming,” London-based economists Timo del Carpio and Vatsala Datta of RBC Capital Markets wrote in a recent note.

Even the ultra-stimulative Bank of Japan may be getting cocky. Last week, BOJ Governor Haruhiko Kuroda took no new action to tackle deflation amid mounting evidence credit and money-supply growth aren’t accelerating as hoped. And you can ignore chatter among economists that the BOJ is halfway to its 2 percent inflation target. The inflation Japan is getting is the bad kind - higher imported energy costs thanks to a weak yen.

A Chinese crash could hit Japan as hard as it would Australia. So could renewed turmoil in Europe, a surge in oil prices and any sudden Black Swan that shakes the global financial system. And to be sure, ultra-low interest rates pose risks, too. Raghuram Rajan, the highly respected Reserve Bank of India governor, worries the next crisis will be the result of monetary excesses in developed nations creating bubbles in emerging ones. Rajan sounded the alarm about the 2008 financial crisis as early as 2005.

For better or worse, though, central bankers are the only ones doing anything to maintain growth these days. With fiscal policy makers constrained by pro-austerity forces from Washington to Canberra, the onus is on Stevens and his peers to continue the fight against downside risks. Modern history is replete with examples of overconfident central bankers starting their austerity cycles too soon. This may be one of those times.