‘Tell them they can!’

‘Tell them they can!’ 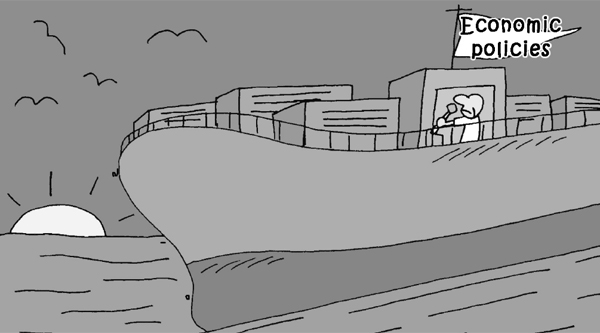 Box-office hit “Roaring Currents,” which scored a record by selling 10 million tickets in just 12 days, is brimming with memorable lines. The epic film about Admiral Yi Sun-sin of the Joseon Dynasty and his valiant defeat of the Japanese fleet with just 12 warships in the 1597 Battle of Myeongnyang left the audience repeating quotes from the legendary war hero at life-and-death moments. One of them was “Tell them they can!”

While under merciless attack by the Japanese fleet, Yi ordered one of his subordinates to move all the cannons on the ship to the left side and fire. His subordinate protested, “But we can all die!” Yi sternly hollers, “Tell them they can!” Yi, just recovering from a cannon shot, sternly tells his men not to give up without trying and to have faith in themselves.

Once we say the phrase, “I can,” a sense of confidence arises. The “can-do” mind-set helps to shake off fear and defeatism with the intoxication of a self-fulfilling prophecy. It is a magic phrase that can miraculously bring about dramatic turnarounds. Yi believed a game-changer in an obviously difficult battle could occur when fear dissipates and builds into collective positive energy. The impetus was his resolute and confident commands and unwavering courage before his men, which assured them they were undefeatable regardless of the odds. Sooner or later, his men fell under the spell and fought with unbelievable spirit and concentration.

Whether the 16th century war hero was a psychological wizard or not, Yi appeared to be well aware of a positive mind-set and how it can dramatically change the mood and outcome on battlefields. Koreans have always proved themselves strongest at the most difficult of times. The “can-do” spirit and slogan was what propelled our people to achieve industrialization and democratization in the shortest time of any country ever. The nation’s extraordinary rags-to-riches transformation also stemmed from the unwavering concentration and energy derived from that “can-do” spirit. It is refreshing to hear the positive exhortation coming from a war hero resurrected on the silver screen.

We yearn for such a self-fulfilling prophesy to revive our lethargic economy. The economy is without any vitality, barely alive, in a comatose state. To give life back into it, all economic participants must snap out of their torpors and summon a new will and more adventurous attitude.

Risk-taking from a positive mind-set and self-confidence can get the economy back on the fast track. Coincidentally, an eager and charismatic leader is at the helm of our economic policy. Choi Kyung-hwan, deputy prime minister for the economy, acted immediately after he took office last month. The economy primarily moves on sentiment. His aggressive stimuli fanned share prices and revived the real estate trade. He got the engine started. The people may have been waiting for such encouragement. Stock and real estate prices can rise when investment sentiment improves on confidence about market prospects. The will and eagerness of the new economic team has sent a positive vibe into the market.

Just because the engine has been ignited, it doesn’t mean we will go far. Both drive and the capability to reach a destination are needed, too. Choi’s guidance so far has been poor. Fiscal and financial stimuli are limited and can take some time to sink in. Taxation to force companies to spend their cash reserves on dividends and investment to help boost economic activity also remain questionable tools. Easing mortgage-related loan regulations may aid the real estate market for a while, but won’t help much to boost overall domestic demand. Choi’s economic prescription succeeded in improving sentiment for sure, but it’s uncertain whether his measures can actually translate into a full recovery in domestic demand. It was a good attempt to change the atmosphere but falls short in building true confidence in the economy.

Real traction will come from structural reforms that can ensure more lasting growth. Sweeping deregulations and liberalization of the services sector and reforms in public enterprises and the labor market are needed. If reforms don’t follow, the fledgling improvement in sentiment could die. A positive attitude can easily be reversed. Choi Kyung-hwan’s team does not have much time. It must act fast to implement reforms and push deregulations.

The deputy prime minister ordered economy-related ministers to make the rounds themselves to personally persuade lawmakers to pass economy-related bills. The people will lose patience and confidence if they do not see improvements. The new economic team so far has strong public support and faith. It must act fast if it does not want to lose it.