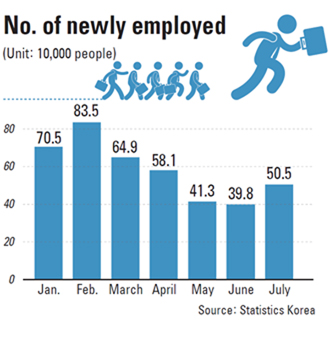 The number of newly employed rose for the first time in five months, largely owing to more jobs in the service sector.

According to Statistics Korea yesterday, the number of Koreans who found jobs grew by 505,000 year-on-year in July, after five months of decline.

Employment recovery in such services as health care, accommodations and restaurants, which temporarily plunged right after the sinking of the Sewol ferry that killed more than 300 people.

The total number of employed in the services sector rose 388,000 in July from a year earlier.

Service industries typically hired at least 500,000 people year-on-year a month until April, but the monthly figure plunged to about 300,000 after the sinking.

The nation’s employment-to-population rate for those aged 15 to 64, climbed 0.9 percentage point to 66 percent. The Park Geun-hye administration’s goal is to reach 70 percent employment by 2017.

In July, the number of people who lost jobs rose 84,000 from a year earlier, driving the country’s unemployment rate up to 3.4 percent.

The youth unemployment rate stood at 8.9 percent last month, down slightly from the previous month. Until February, it had hovered above 10 percent.

Those in their 20s led the growth in youth employment, with 84,000 of the newly employed in that age group, data showed.

The Ministry of Strategy and Finance noted that employment rates grew across all age groups.

“Even though the overall economic sentiment is still negative, the economy seems like it is gradually emerging from the impact of the Sewol ferry accident,” said a ministry official.