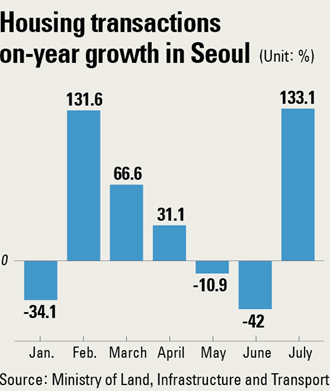 The property market came back from the dead last month in response to the government’s easing of regulations on mortgages.

According to the Ministry of Land, Infrastructure and Transport, housing transactions last month surged 94 percent compared to a year earlier to total nearly 770,000 units. This was a sharp turnaround from a 43.7 percent plunge the previous month.

Even when compared to June, housing transactions increased 5.1 percent.

The biggest rebound was seen in Seoul and neighboring areas.

Compared to a year ago, transactions in the greater Seoul area rose 111.9 percent. Seoul alone saw transactions spike 133.1 percent. This is the sharpest increase since February, when transactions rose 131.6 percent. Housing transactions in February are normally buoyant because the new school year starts in March.

It was a sharp turnaround from the 42 percent drop posted in June.

Transactions in the three major districts of southern Seoul - Gangnam, Seocho and Songpa - saw significant recoveries, spiking 204.6 percent. Not only is this a 10.8 percent increase compared to the previous month, it is also a sharp turnaround from the drastic year-on-year plunge of 48.3 percent seen in June.

The Land Ministry said that interest in higher-priced apartments in the greater Seoul area has been gaining momentum. Since the global financial meltdown of 2008, smaller apartments with lower values have been more popular, while larger and more expensive apartments have languished.

Outside of the greater Seoul area, sales of apartments with prices between 300 million won and 400 million won saw a sharp rise of 228 percent.

“The reason housing transactions last month spiked so much is largely because the new economic team led by Choi Kyung-hwan showed a strong will to ease financial regulations, including restrictions on mortgages such as the debt-to-income ratio and the loan-to-value ratio,” said an official at the Land Ministry. “This helped restore buyer sentiment.”

According to the Bank of Korea yesterday, 2.8 trillion won of fresh mortgages were borrowed from banks in July. Although the additional loan volume actually fell slightly from June’s 3.1 trillion won, demand is stable. Mortgages at banks now total 340 trillion won.

Budongsan 114, a property market information provider, said this is the perfect opportunity for homebuyers since apartment values are sharply down compared to five years ago while low interest rates lead to affordable mortgages.

“The average apartment price in the greater Seoul area as of the end of July was 360 million won, which is an 8.8 percent drop compared to the 394.7 million won average at the end of 2009,” said Kim Eun-ji, an analyst at Budongsan 114.

She added that thanks to the historic low interest rates on mortgages, the loan interest burden is on average 20 million won less than five years ago. As of June, the interest rate on a new loan was 3.58 percent, which was 1.96 percent lower than 5.54 percent in 2009.