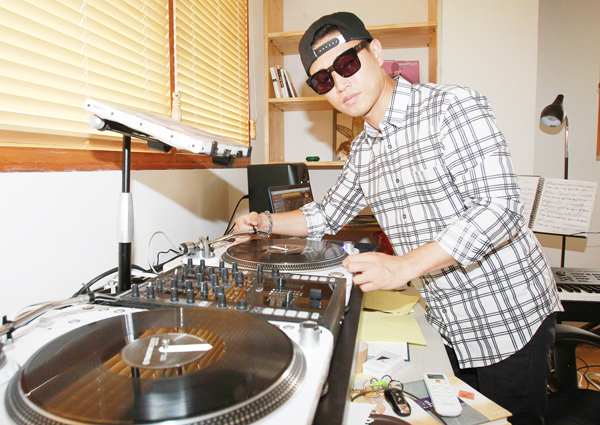 Gary of the hip-hop duo Leessang, who is better known among older fans for his provocative and aggressive rap lyrics, has reached out to younger music lovers in more recent years.

Although he was already well known for popularizing hip-hop in Korea, the rapper become a star among school-age students after he joined the popular SBS entertainment show “Running Man” in 2010.

Ilgan Sports, an affiliate of the Korea JoongAng Daily, sat down with the hip-hop star to talk about how he manages to appeal to both young and old fans at the same time.

Q. How did you feel about joining “Running Man”?

A. It was hard at first. I went out of my mind after seeing 10 cameras rolling at the first filming session. Whatever I did, I felt awkward. I slept over at Ha Ha’s place almost every day, talking about [what we should do in the program] for two or three hours. He kept saying that once I have a character established, Yoo Jae-suk would take care of the rest in the show.

He really did. He knows me really well. I can’t fake a laugh, and I can’t fake any response. I also space out a lot. He understands every little thing I do and works those for my benefit. He’s like that with all the other people on the program. It’s weird if the show isn’t well-received.

How long do you want to do it for?

I want to put my best effort in until the program is canceled - I have a responsibility. I’m energized when I think of the fans.

Do you like being the front-runner of hip-hop in Korea?

Except for the weekend when I film “Running Man,” I go to the studio for about 12 hours and then come home at dawn. I come back to the studio when I wake up.

I have a one-year rule. Whatever you do, if you give it your crazy, full attention for about a year, you can form your own identity and it will last about a decade. When I think about [my life] in 10 years, I need to have that year where I can just go crazy with music.

What was your life like before you became better known?

After me and Gil started talking about working together as a group, I taught idol stars and made 2 million won [$1,944]. I lasted a year on that money. I made kimchi fried rice in the morning and then ate it for lunch and dinner as well. I never left home; I just listened to music, wrote lyrics and rap. I even told my best friends not to contact me.

How did you come up with your own style?

I just thought I could write about being Korean. I studied all the hip-hop albums in Korea and analyzed lyrics every day for about three hours. I learned that if I put in effort to write lyrics and made income from copyrights, I wouldn’t have a reason to quit music.

Isn’t it weird to write more provocative lyrics when you are in a program that young people watch?

It was a little hard in the beginning. I stopped doing music. My latest solo album “Shower Later” included a lot of slang and provocative lyrics because I wanted to erase the line that restricted me [from doing music I wanted to do].

Of course, there have been complaints. One parent called saying that I couldn’t write such as song because I’m on a program children watch.

But not everyone is like that. I once heard an elementary student singing my song. I was shocked and told him not to listen to it, but the kid’s mother said it’s OK because children already know about these things. I never thought I would be comfortable doing the music I want to do, but I feel relieved when people [are more understanding].