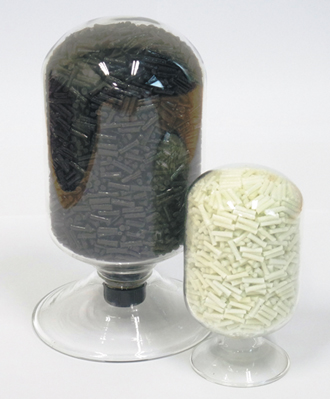 The affiliate of GS Group developed LFT at the end of 2012 and finally saw it used in the sunroof frame of Kia Motors’ third-generation Sorento midsize sport utility vehicle that will be released Aug. 28.

It is the first time for LFT material to be used in the mass production of at least 100,000 units. GS Caltex said it has applied for a co-patent with Hyundai Motor Group to use the material.

Previously, carbon-fiber reinforced plastics (CFRP) were used in Formula One cars as well as the BMW i3 electric vehicle.

“Our twisted LFT production technology maximizes polymer impregnation into the glass filaments, which provides superior thermal and mechanical properties,” the company said in a statement. “Moreover, almost all kinds of fibers could be utilized for LFT production based on this technology, so we are able to provide various products for the customers.”

GS Caltex said it had found the best combination of materials to suppress post deformation, while simultaneously enhancing strength and impact resistance.

The company claims its material is 50 percent lighter than other materials used in automobiles and enhances both fuel efficiency and body stability.

GS Caltex said the product had a promising future as automakers move to lighter vehicles to boost fuel efficiency and meet government standards.

The Korean government in 2009 set standards that require automakers to have a passenger car fleet average of 17 kilometers per liter (39 miles per gallon) by 2015. If they fail to meet the standard, they will be fined.

GS Caltex said it would first knock on the doors of global automakers that are eager to increase the range of their electric vehicles.

“We can apply the LFT material to various auto parts and by adding our chemical combination technology, we expect it will have a big impact on the auto parts market,” the company said in a statement. “The development of this material technology not only boosts our profitability, but also is in step with our vision to become a global chemical company.”