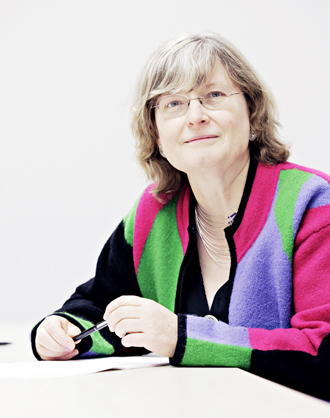 The global community of mathematicians is bringing more attention to developing countries, and Korea is playing a significant role in the shift, the head of the International Mathematical Union said yesterday.

“I am very happy to be with this [International Congress of Mathematicians], because there was an incredible initiative and proposal from Korea’s mathematic society to raise money to bring 1,000 mathematicians from developing countries,” Ingrid Daubechies, the president of the International Mathematical Union (IMU), said during an interview prior to the kickoff of the ICM yesterday in Seoul.

The ICM, dubbed the Olympics of mathematicians both for its significance and for its quadrennial cycle, was long dominated by advanced countries since its launch in 1897 in Switzerland.

However, this year’s congress, held under the banner “Dreams and Hopes for Late Starters,” is shining a light on the expanding role of and interest in developing countries. Three of the four 2014 Fields Medal Award winners announced yesterday in Seoul are ethnically Asian or Latin American.

According to Kim Dong-su, a senior member of the organizing committee for the ICM 2014, nanum, which means “sharing” in Korean, inspired the IMU to put the focus of the ICM more on developing nations. On Tuesday, for the first time in the history of the congress, the ICM 2014 held a symposium on developing countries.

During the symposium, titled “MENAO, or the Mathematics in Emerging Nations: Achievements and Opportunities,” the participants discussed the link between mathematic development and economic development and how to help poor countries foster economic growth through math.

“This ICM really marks a milestone in that respect,” Daubechies said.

The Duke University professor added that mathematicians’ growing openness also comes with the shift in the nature of doing mathematics, from an individual effort to collaboration. The evolution of an Internet environment has also fanned the trend.

“Mathematics is very collaborative and very much about making links within mathematical disciplines, and within other disciplines, and that happening more and more,” she said. “And part of the reason might be that we are learning quickly what’s happening elsewhere through the Internet.”

Daubechies used the Polymath Project as an example. An initiative in which mathematicians worldwide work together to solve difficult math problems, the project has recently advanced discussions on the “gaps between prime numbers,” a mystery that found its impetus thanks to Chinese scholar Yitang Zhang.

“People working together, finding solutions together can always lead to better things, and that’s what mathematicians are really trying to do,” she said.

Korea being at the center of a paradigm shift within the global math community is not a coincidence, Daubechies explained. She said Korea has grown significantly over the past few decades and is now undoubtedly among elite mathematics countries.

No Korean has yet to win the Fields Medal, one of the greatest honors in the field, though Daubechies said Korean mathematicians would likely win the award in the “foreseeable future.”

“Korea has made amazing progress, in mathematics and everything else,” she said. “In the ’60s, the Korean mathematicians published few papers, and now the sky is the limit for them.”

Daubechies will finish her four-year term as IMU head at the end of this year. Shigefumi Mori, a Japanese Fields Medal winner and a professor at Kyoto University, was elected as next the IMU president during the IMU General Assembly on Monday in Gyeongju.

Daubechies said her work at the IMU had been rewarding, but “I am looking forward to going back a little bit more to mathematical research.”