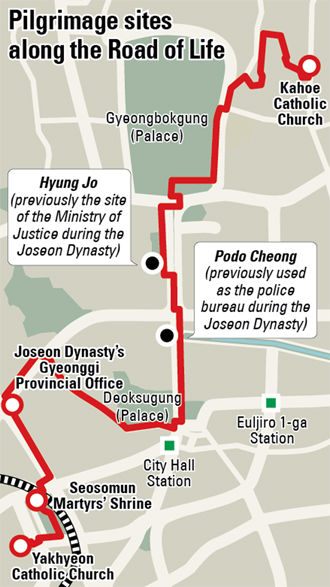 Pope Francis’ visit to Korea, which officially begins today, has shone a light on the turbulent history of Korea’s Catholics that was marked by relentless persecution in the early days.

Seizing on this landmark event, the Archdiocese of Seoul has moved to seek approval from the Vatican to designate three courses in Seoul as official pilgrimage routes.

Korea has a number of sites related to its martyrs, though none of them has been recognized by the Vatican.

The three pathways - named by the Archdiocese as the Roads of the Word, Life and Accordance - measure 28.42 kilometers (17.7 miles) total and would take most pilgrims about 15 hours to cover.

The Road of the Word encompasses such sites as the Catholic University of Korea, the residence in central Seoul of martyr Kim Bum-woo and Myeong-dong Cathedral, built in 1898.

Kim Bum-woo was among the earliest Catholic martyrs in the 18th century. He often hosted religious meetings and invited devout Catholics to his home in Jung District. He died in 1786 after being tortured for his religious beliefs.

The second pilgrimage path, the Road of Life, encompasses shrines where a number of the country’s martyrs are buried. The highlight of the course is the Seosomun Martyrs’ Shrine in Jung District, which houses the remains of more than 70 believers who died for their faith. The pontiff will pay a visit to the shrine on Saturday morning.

The Road of Life ends at Yakhyeon Catholic Church in Jung District. Established in 1981, the church is Korea’s oldest cathedral.

Inside the church is the Seosomun Martyrdom Holy Land Exhibition Hall, which displays spiritual books and documents used by the believers who died in major waves of persecution during the Joseon Dynasty (1392-1910).

The final pathway, the Road of Accordance, consists of religious sites centered in Mapo and Yongsan Districts. Among them is the Saenamteo Martyrs’ Site in Yongsan District, where priests and bishops were executed.

This is also the place where Korea’s first priest, St. Andrew Kim Tae-gon, was killed.