Calls for a new military system rise amid abuses

Calls for a new military system rise amid abuses 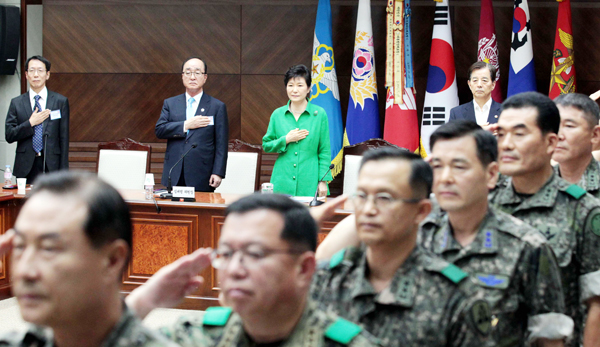 President Park Geun-hye presides over a meeting with military leaders yesterday to discuss measures to tackle chronic “evil, anti-human practices” as well as an overhaul in military culture in the wake of a series of recent abuse cases in the armed forces. [Joint Press Corps]

In light of a series of recent abuse cases in the Korean military, specifically the death of a young Army conscript in April who had endured systematic physical assault at the hands of his superiors, calls have risen among parents with sons yet to enlist for replacing the current mandatory draft system with a voluntary one.

On some Internet portal sites, campaigns are already underway to collect signatures to petition for the shift, shaking the fundamentals of the compulsory enlistment practice long understood as necessary and unavoidable in a country dealing with its unpredictable and hostile neighbor to the north.

In line with growing discontent over the current system, some military experts and politicians say the time may have come to discuss a change in the draft.

“In the long term, we need to introduce a voluntary military system by reducing the number of soldiers and simultaneously increasing non-commissioned and commissioned officers. That will make for a small but strong military,” said Yang Wook, a senior researcher at the Korea Defense and Security Forum.

Saenuri Rep. Shon In-chun, herself a former first sergeant, agreed with the need for an eventual shift to a voluntary system, saying it would stem inhumane practices occurring at the barracks and contribute to overall economic growth.

But skeptics argue that the country is not yet ready to embrace a voluntary system if it is to maintain its current military capacity of 639,000 soldiers. The military expects that this figure will fall by about 140,000 to reach some 500,000 by 2020 as a result of a shortage of young men due to low birth rates that have affected the country for more than a decade.

“If the country were to maintain a 500,000-man military under the voluntary system with a three-year mandatory term, it would have to recruit 120,000 soldiers every year to maintain that manpower, which would require an additional 6 trillion won ($5.8 billion) in the defense budget,” said Jung Ju-seong, a senior researcher at the Korea Institute for Defense Analyses (KIDA). Jung added that 2.5 trillion won more would be required if the country were to have a military with 300,000 soldiers - about half of the current force.

“Taking into account the growing demand for more welfare benefits, it is realistically a slim possibility that the country could embrace the voluntary system, which would require a 25 percent increase in the current defense budget,” said Kim Jun-seob, who teaches at Korea National Defense University.

Another problem that could emerge with the shift is whether enough people would volunteer to go into the armed forces. According to the KIDA, in order to maintain current military strength, about 40 percent of able-bodied men would have to voluntarily enlist in the Army.

The defense institute estimated, however, that only 2 to 3 percent of the population would actually choose a military career on the condition that they would be paid 21 million won annually.

“People would recognize more downsides to serving in the military [under the voluntary system] than working in the public sector, from an economic perspective,” said Professor Suh Yong-gu, who teaches at Sookmyung Women’s University.

Experts say that by looking at examples from other countries, including France and Italy, which have shifted from a compulsory system to a voluntary one, the prerequisites for introducing a voluntary system would be to have a maximum of 300,000 men in the military, as well as at least $300,000 in gross domestic production.

According to an assessment by the International Monetary Fund, Korea is projected to surpass $30,000 in GDP per capita by 2017. The Army is generally opposed to reducing the size of its forces, saying it would deal a blow to military readiness and the country’s ability to fend off threats from Pyongyang.

Still, other experts claim the Army is opposed to a reduction simply because its officials are worried about losing their positions.

Jung, from the KIDA, noted that, in retrospect, “a change in the military system has more often been made because of a change in political and social sentiment and demand, rather than a change in national security conditions.”