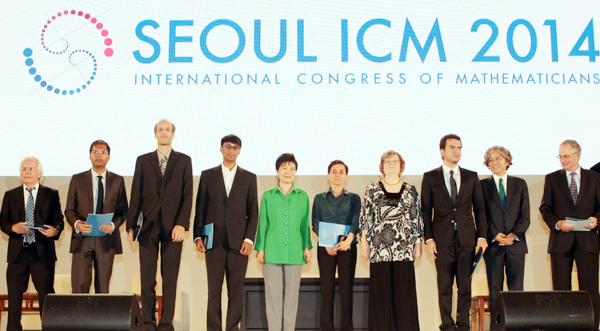 President Park Geun-hye, flanked by representatives of international and Korean mathematics societies, celebrates the opening of the 2014 International Congress of Mathematicians at Coex, southern Seoul, yesterday. The nine-day convention is being held in Korea for the first time. [Joint Press Corps]

Maryam Mirzakhani, a mathematics professor at Stanford University, was one of four Fields Medal recipients honored at the opening ceremony of the Seoul ICM held at Coex in southern Seoul. It is the first time the Fields Medal, often called the Nobel Prize for mathematicians, was awarded to a woman since the awards began in 1936.

“In particular, I highly honor and admire the great spirit of challenge and passion of Dr. Maryam Mirzakhani, the first female to be awarded the Fields Medal in its history,” said President Park Geun-hye in an opening speech after granting the awards.

It is the first time Korea was the venue for announcing Fields Medal winners, who are honored at every ICM. Three other Asian countries - Japan, China and India - hosted the quadrennial event. India hosted the previous event in 2010.

The one-day symposium, “Mathematics in Emerging Nations: Achievements and Opportunities,” was held at Coex on Tuesday.

“Korea achieved remarkable economic growth within a short period of time and a parallel advance was achieved in the study of mathematics in spite of a late start,” President Park said, highlighting Korea’s fast elevation in status in global math circles.

Korea rose by two notches to the IMU’s tier 4 group, the second highest, in 2007, 26 years after the country’s acceptance into the lowest tier of the union.

Park Hyung-ju, chairman of Seoul ICM’s organizing committee, was also elected to become the first Korean member of the Executive Committee of the IMU during the IMU General Assembly in Gyeongju on Monday.

“I would like to ask the honored mathematicians gathered here to inspire our young generation to enjoy mathematics and grow up as creative and talented individuals with a sense of creativity, and rationality who ultimately contribute to the future of humanity,” Park said.