Pope to focus on the marginalized, those in need during his trip

Pope to focus on the marginalized, those in need during his trip 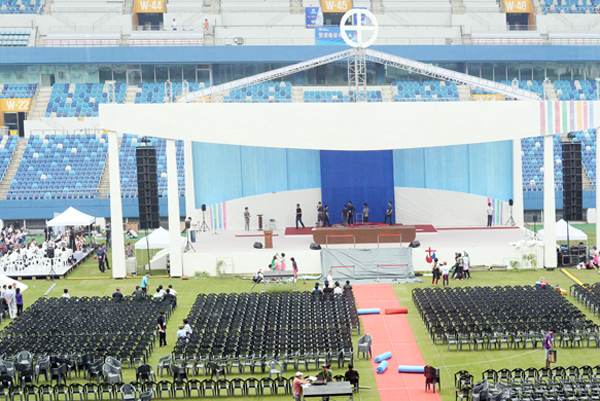 Workers set up an altar yesterday at Daejeon World Cup Stadium, where Pope Francis will preside over a Mass tomorrow for the Assumption of Mary.[NEWSIS]

The central theme of Pope Francis’ visit here will be the quest for peace and reconciliation on the Korean Peninsula.

In this vein, the pontiff’s visit to Korea, which runs from today to Aug. 18, is expected to carry a political meaning along with religious symbolism, with events involving many types of people, particularly the marginalized.

The highlights of the pontiff’s journey include meeting participants in the 6th Asian Youth Day on Friday and beatifying 124 Korean martyrs on Saturday.

The Vatican has also arranged meetings with various groups, including survivors of the April 16 Sewol ferry disaster and relatives of its victims, victims of wartime sexual slavery, the disabled and nuns who once served in North Korea.

Pope Francis is packing an intense set of programs into his five-day visit. The Holy Father is set to arrive at 10:30 a.m. today at Seoul Airport, a military air base in Seongnam, Gyeonggi. Upon his arrival, the pope is set to head to the Apostolic Nunciature in Korea, central Seoul, where he will hold a private Mass. Then he will move to the Blue House, where he will meet President Park Geun-hye. The first day will end with a meeting with the bishops of Korea at the headquarters of the Catholic Bishops’ Conference of Korea in Gwangjin District, eastern Seoul.

His second day will start with a celebratory Mass at World Cup Stadium in Daejeon to mark the Feast of the Assumption. The pope is scheduled to have lunch with youth representatives of Asian Youth Day and singer BoA, who is Catholic. He will meet more Asian youths at the Solmoe Shrine in Dangjin, South Chungcheong. The shrine was built in commemoration of Korea’s first Catholic priest, St. Andrew Kim Tae-gon.

On Saturday, he will visit the Seosomun Martyrs’ Shrine in central Seoul. Then, beginning at 10 a.m. in central Seoul’s Gwanghwamun, he will preside over the beatification Mass of 124 martyrs who were relentlessly persecuted and lost their lives under the reigning Joseon Dynasty (1392-1910). Following the Mass, the Pope will visit a rehabilitation center in Kkottongnae, a community for the disabled, in Eumseong County, North Chungcheong.

The next day, the pontiff is scheduled to meet with the Asian bishops in Haemi Martyr’s Shrine in Seosan, South Chungcheong, followed by a concluding Mass for the 6th Asian Youth Day near the Haemi Fortress of the Seosan city.

Pope Francis will wrap up his visit on Monday with a Mass for peace and reconciliation at Myeongdong Cathedral in central Seoul, inviting nearly a thousand people. 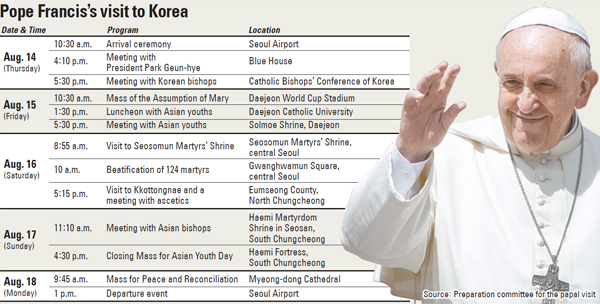 The pope took his papal name from St. Francis, a venerated figure who stressed God’s brotherhood with all people, rich and poor. In honor of the saint’s philosophy, the pope has taken dramatic steps to keep close with people in the lower echelons of the society. His latest visit is no exception.

About 10 cleaners and groundskeepers at the Apostolic Nunciature will join the first Mass he will hold in Korea there, according to the preparation committee for the papal visit. It added that Pope Francis will deliver encouraging words to them and present them with rosary beads as gifts.

Another unanticipated invitation involves the bereaved families and survivors of the Sewol ferry disaster at the Mass on Friday in Daejeon. Following the service, eight family members and two teen survivors will hold a private meeting. A representative of the victims’ families said that they will seek help and attention from the pontiff in a push to press the government and the ruling Saenuri Party to establish an independent, authoritative panel to further investigate the cause of the Sewol disaster.

The last day’s Mass dedicated to reconciliation and peace will likely epitomize the Pope Francis’ efforts to embrace and console the weak and the suffering.

Eight of the women who were forced into sexual slavery by the Imperial Japanese Army during World War II will attend the Mass.

“Since the Mass is to call for peace and reconciliation, the pope has invited people who are at the center of conflict and those who seek to resolve it,” said Huh Yeong-yeob, the preparation committee’s spokesman.

The committee said that it has invited fired workers from Ssangyong Motor who protested the massive layoffs at the automobile company as well as residents from Gangjeong Village in Jeju, who have long clashed with the government over its decision to turn the site into a naval base. About 30 displaced people who lost their homes in the wake of various natural disasters will also join the Mass.

Instead, three nuns who took religious vows in the North before the 1950-53 Korean War are expected to attend.

The sisters, now in their 90s, are among 10 nuns who devoted their lives to god in the reclusive state. The three moved to the South in the wake of the war and have lived here since.

“The invitation is intended to convey a message toward North Korea, which relentlessly persecutes religious people,” said a source from the Korean Catholic Church who requested anonymity.

Among various events, the high point of Pope Francis’ visit will be the Mass on Saturday beatifying 124 Korean martyrs.

During the service, the pope will beatify 124 Korean martyrs who gave their lives for their faith under threat of persecution during the 19th century.

The venues for the Mass will encompass Gwanghwamun Plaza, Seoul Plaza and Cheonggye Plaza near City Hall. The city government estimates that more than a million people will attend. Beatification is the third of four steps in the Catholic Church’s canonization process.

The event will last two hours and 20 minutes, starting at 10 a.m.

The pope will travel about 1.2 kilometers (0.7 miles) along Sejong-ro in Gwanghwamun as part of a procession and conduct a Mass.

During the march, the pontiff will ride in a Kia Soul, breaking with the tradition of deploying a bulletproof vehicle.

In line with his request to remain low-key, he will stay at the building of the Apostolic Nunciature in Korea.

The Seoul government has begun controlling traffic on surrounding roads and will close City Hall, Gwanghwamun and Gyeongbokgung stations on that day. The Seoul Metropolitan Government will also ban people from entering surrounding high-rise buildings.

A total of 2,000forces will be dispatched to the site to ensure security and safety, along with 30 Blue House guards specifically assigned to protect the pope. The government will establish emergency medical centers in the event of an accident.

Another focus of the pontiff’s visit will be his participation in the 6th Asian Youth Day, where he will preside over another Mass. Asian Youth Day is a smaller, regional version of the Catholic Church’s World Youth Day. About 2,000 Catholic young people from more than 20 Asian nations will take part on Sunday to reconfirm and strengthen their faith.

Under the theme “Asian Youth: Wake Up! The Glory of Martyrs Shines on You,” the event will run Aug. 13 to 17 in Daejeon.