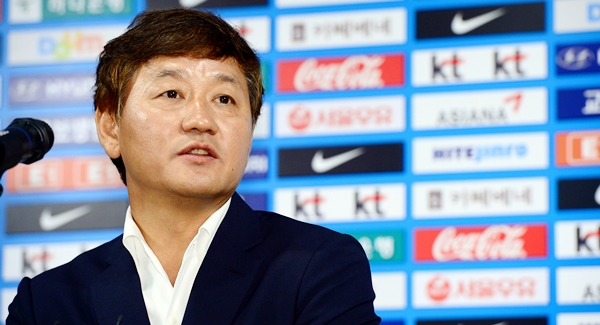 For the Korean national U-23 football team, winning a gold medal in the 2014 Incheon Asian Games will be a difficult goal to achieve.

After the country’s best winger Son Heung-min was prevented from joining the competition by his club team, Bayer Leverkusen, Korea has also been denied midfielder Lee Myung-joo of Al Ain FC of the United Arab Emirates. Instead of those two, Korea decided to add defender Park Joo-ho of FC Mainz 05 of Germany to the lineup.

Lee Kwang-jong, coach of the Korean national U-23 football team, yesterday announced his 20-man roster for September’s Asian Games at the headquarters of the Korea Football Association in Jongno District, central Seoul and said his goal is still to win the event.

The biggest surprise came from Lee’s three wild-card picks, which each team can use to select players over the age of 23. As predicted, one of them was used for 196-centimeter (6 feet 6) striker Kim Shin-wook of the Ulsan Hyundai Tigers and another for his teammate goalkeeper Kim Seung-gyu. But the last wild card was used for defender Park, who was a member of the 2014 Brazil World Cup national team along with the Ulsan duo. 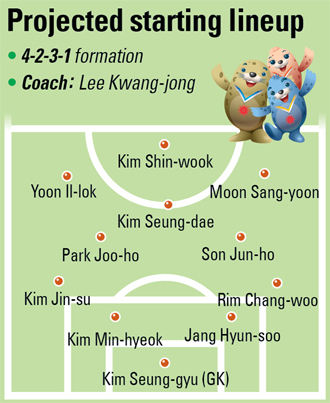 “It is true that we wanted to bring Lee [Myung-joo], but their club said they can’t release him for the event,” Coach Lee said. “Park mostly plays as a defender in his club, but he is capable of playing in multiple positions. I remembered that he played as a defensive midfielder and also played as a winger [like Son Heung-min] at his club, which I though is a valuable talent for the team. And since he also has experiences in the [World Cup] national team, bringing him to Incheon should be a huge plus for us.”

The Asian Games are not recognized by FIFA regulations, which say that club teams are only required to send players to the World Cup, international matches and events organized by the Asian Football Confederation (AFC) such as the Asian Cup. Lee added that FC Mainz 05 decided to let Park play in the Incheon event.

The coach said the roster was decided based on the performance of players in the AFC U-22 championship held in Oman in January and a friendly match against Kuwait in June and said that he believes that the team is strong enough to win a gold medal in Incheon.

The coach hasn’t presented a specific plan for his formation, but the giant striker Kim will be on the top of the offensive line with FC Seoul midfielder Yun Il-lok, Kim Seung-dae of the Pohang Steelers and Moon Sang-yoon of Incheon United as support. Park from FC Mainz 05 is predicted to be paired up with defensive midfielder Son Jun-ho of the Steelers in front of the four defenders - Kim Jin-su of TSG 1899 Hoffenheim, Jang Hyun-soo, Rim Chag-woo and Kim Min-hyeok.

“I considered using one of the wild cards to bring in a defender, but I think our four-back line is strong. Jang Hyun-soo, for instance, has a lot of A-match experience on the national football team and I think he will lead the defense well. Our goal is of course winning a gold medal, even though it will be a hard mission to complete. Our rivals are Japan, Iraq, Iran and the UAE.”

The women’s U-23 team also did not get its ace player for the Incheon event. The football governing body yesterday revealed the 18-woman final roster for the Asian Games without the name of the country’s best striker Park Eun-seon, who recently joined Russian club FC Rossiyanka.

“The Russian club informed us that they can release Park on September 28,” the Korea Football Association’s PR chief Cho Joon-heon said at the briefing. “That is the date that semifinals are scheduled, meaning that she will be only able to play for the final. Because the women’s team can only have 18 players, we had to bring in another player.”

Another top player Ji So-yun of Chelsea FC’s Ladies team will join the team after the Round of 16, the KFA said.