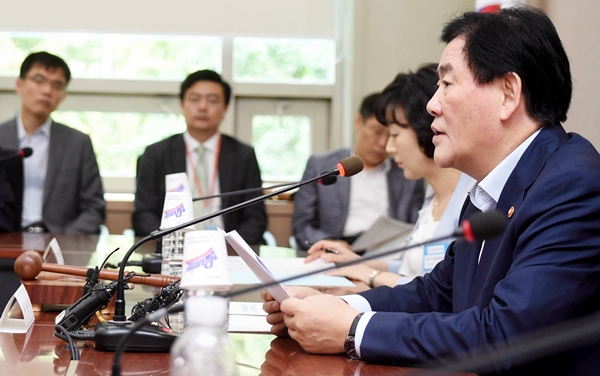 Deputy prime minister for the economy, Choi Kyung-hwan, holds a keynote speech at a meeting aimed at reinforcing the role of public corporations in the economy last month. [NEWSIS]

It’s a bit strange that people refer to the economic policy of the current government as Choinomics after Choi Kyung-hwan, deputy prime minister for the economy, instead of giving President Park Geun-hye the honor. It can’t be that the new finance minister wields more power than his boss.

Yet the set of economic measures and policy directions sounds more plausible when attributed to the veteran politician handpicked by the president to revive the sagging economy.

Choi made a splash soon after he took office last month, wasting no time in churning out measure after measure to stimulate the economy and pledging to experiment in ways that prompted comparisons to Japanese Prime Minister Shinzo Abe’s aggressive, semi-successful Abenomics.

Park is in her second year of a five-year term. At the time she took office, I happened to discuss the theme of the president’s economic policy, or Geun-hyenomics, with several economists and journalists specializing in business and economic affairs. But we didn’t get very far with the discussions because it was hard to pinpoint specific characteristics of her economic policy. No one could confidently say what she placed highest priority on: growth, distribution, welfare - or all three. Was she pursuing balanced growth through efforts to ease inequalities or was economic recovery her goal? Hers was a muddy mixture of everything without any particular focus. We decided to drop the word Geun-hyenomics because her approach, in fact, lacked any individuality. We talked instead of the economic policy of the new government. But even then, when we had begun discussions, we were at a loss of where to go with them.

Unsurprisingly, Park’s economic policy turned out to be incoherent, without direction, random and often swaying according to popular demand. The tax code revision, which should have reflected the new government’s philosophy on economic affairs, more or less amounted to tax hikes to finance Park’s campaign pledges of more social welfare spending. And then the government dropped the package when faced with criticism. The government’s economic policy had no backbone, principles or vision. It was like finding it hard to choose at a restaurant because the menu had too much of everything.

What exactly is Choinomics? It’s the chef’s choice that includes every desirable recipe. There is no ingenuity about it and the chef is proud to call it a mix of everything. Boldness has earned Choi a menu named after him.

His choice of ingredients has been no different from his boss. President Park has said the economy must be saved through all possible financial and fiscal means. Choi repeated that mantra after having been appointed. The president also warned that the country could be headed toward an unfortunate Japanese-style trajectory of a “lost decade” or two. Once again, Choi reiterated the president’s words. The difference is that she was making an observation while Choi was stating an intention. Choi put the president’s words into action. It shouldn’t matter who said it first. The fact that the president and the cabinet head in charge of economic affairs see eye to eye is good news.

A buffet is meant to satisfy a good appetite rather than a picky one. Taste, nutrition or ambience does not matter much. The goal of Choinomics is simple: revive the economy. The action plan also has been textbook simple - prop up real estate and stock prices. Fiscal pump priming and arm-twisting companies to spend more were other elements. The plan unabashedly borrowed the liberal camp’s idea of reorienting the economy to focus on boosting household incomes.

So far the buffet-style economic package has been working. Despite concerns about side effects and asset bubbles, stock and real estate prices are on the rise. Political gain also followed. The ruling party benefited from its aggressive economic revival plan and grabbed a surprising landslide victory in the July 30 by-elections despite strong criticism of the government’s dismal handling of the Sewol ferry crisis.

Public confidence is likely to remain with the new economic team until the end of the year. Let’s just hope we end up satisfied and can afford the bill at the end of the day.