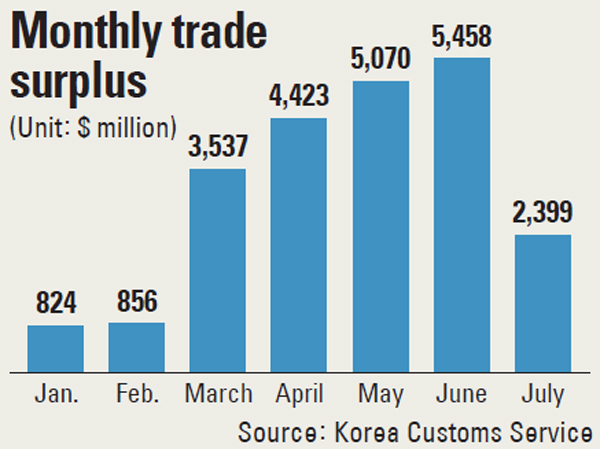 Korea logged a trade surplus for the 30th consecutive month in July, reinforcing its position as a strong export-driven economy.

According to the Korea Customs Service yesterday, the country had a monthly trade surplus of $2.4 billion, exporting $48.3 billion in goods while importing $45.9 billion. Exports grew 5.4 percent year-on-year last month, as imports rose 5.8 percent.

Korea’s total exports were $331.6 billion this year through July and imports $309 billion. As a result, the country has produced a total trade surplus of $22.6 billion. The surplus is slightly higher than the $22.4 billion during the same period last year.

The country’s exports as well as trade surplus are likely to climb further, as the government plans to foster growth of exporters more aggressively.

The Ministry of Trade, Industry and Energy announced on Tuesday in the sixth presidential meeting on trade and investment that it will help as many as 10,000 small businesses that rely on the domestic market to tap foreign markets by 2017.

As of last year, there were about 90,000 exporters in the country.

“As exporters earn more from overseas markets, this will help them raise wages for employees in the domestic market, contributing to overall economic growth,” said Oh Se-hwan, a research fellow at the Institute for International Trade at the Korea International Trade Association. “Growing daily export averages are a clear sign of an improving export market.”