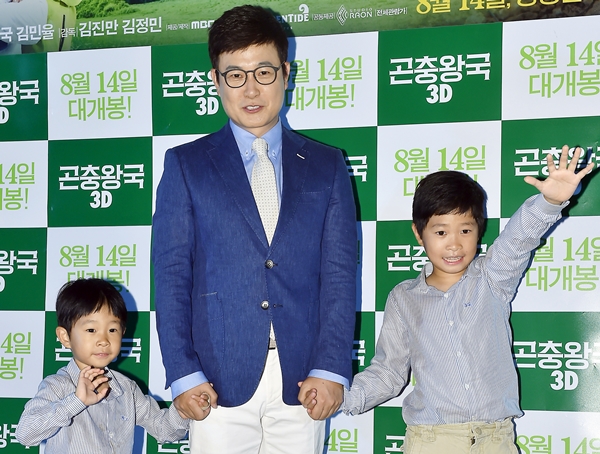 Bugs are usually seen as pests. But in the upcoming film “Insect Kingdom,” multi-legged creatures are regarded in a wholly different light - as protagonists that will entertain the audience for a full 85 minutes.

Masters of the documentary world, producers Kim Jung-min and Kim Jin-man, who were behind the domestically acclaimed “Tears of Amazon” and “Tears of the Antarctic,” take to the screen once more to introduce a microscopic, 3-D world that’s never been seen before in Korea.

This time, the two use narrators, the father and son trio Kim Sung-joo, Kim Min-guk and Kim Min-yul from the hit MBC reality show “Dad! Where Are You Going?,” to narrate the interesting lives of insects.

While there is no plot in the traditional cinematic sense, these bugs, as portrayed by the Kims, steal each and every scene.

“Insect Kingdom” attempts to undo any possible aversion the audience may feel towards creatures that crawl, fly and swim across the Korean Peninsula.

Just a few minutes into the film, the message is clear: these bugs are more than just pests.

The seemingly cliched story of a caterpillar turning into a cocoon and becoming a butterfly takes on a different mood as it unfolds in 3-D. 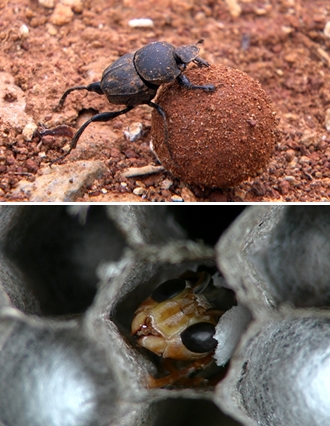 With a budget of 1 billion won (963,359 dollar) and two years of production, the 3-D film is set to zoom in on the love that insects have toward their kin.

As the giant purple butterfly cracks opens its shell and spreads out its wings, the audience shares a moment of awe.

The 3-D effects make it seem as if the bugs have grown in size, so the scene where the fishing spider leaps on its prey, splashing water, becomes more realistic and thrilling.

The movie does more than just simply educate the audience by introducing bugs as if in an encyclopedia.

Instead, it shows that insects have an unexpected emotional side. Although they come in various colors and sizes, one thing bugs have in common with people is an unmeasurable love for their offspring.

Not too differently from the human species, most - if not all - insects will risk their lives to protect their brood.

Some carry newborn caterpillars uphill, while others make multiple trips to the creek to make sure their eggs don’t dry out.

Even in the smallest, seemingly insignificant creatures, maternal affection is instinctively instilled.

At a press screening last week, the two producers said they wanted to shine a light not just on insects but on the importance of family.

“I wanted them to feel, ‘my parents live just as hard for me as well,’?” said Kim Jung-min, who believes that the documentary could be a gentle reminder to teenagers about the love their parents have for them.

“I felt it from all of them [the insects]. It’s admirable that they try their best to grow and raise their larva,” Kim said.

On the topic of family and love, Kim Sung-joo shared his reasons for bringing his children on board the project.

“I thought this would be a good opportunity for Min-yul and Min-guk to participate, whether or not they were good at narrating,” said Kim. “They could learn a lot just through participating and watching the movie.”

As well as narration by the famous father and sons, the film boasted a large budget.

The producers also covered more than 65,430 kilometers (40,656 miles) of ground looking for the ideal insects to use.