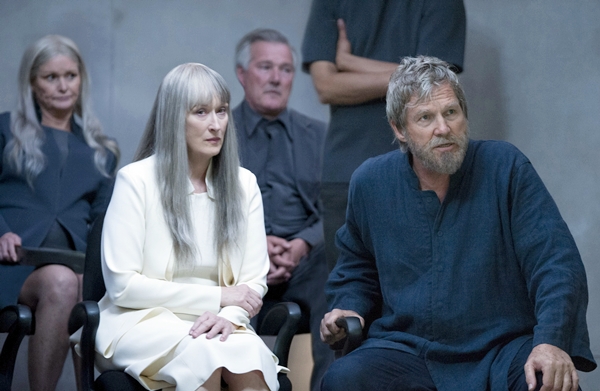 This image released by the Weinstein Company shows Meryl Streep, left, and Jeff Bridges in a scene from “The Giver.” [AP/NEWSIS]

NEW YORK - It was almost 20 years ago, and actor Jeff Bridges was searching for a movie project that would be a family affair - one in which he could direct his father, Lloyd, and that his children, then around middle school age, would want to see.

An entry in a children’s book catalog caught his eye. “It had a picture of this old grizzled guy on the cover. And I said, ‘Oh, dad could do that!’”

That book was “The Giver,” by Lois Lowry, which won the prestigious Newbery Medal in 1994 and has sold over 10 million copies worldwide. He read it, then mentioned it to his kids. “They said, ‘Oh, we know that, we read it in school,’” he said in an interview this week. “It turned out there were whole curriculums based on it.”

Indeed. There’s hardly a middle schooler who hasn’t been assigned “The Giver” at some point. And so the film version, opening this week, isn’t exactly riding the coattails of book-to-film franchises like “The Hunger Games” and “Divergent.” You might actually say it started the whole craze.

But why did it take so long to get made?

There were problems. The book, which depicts euthanasia, for one thing, was banned in some places. And because so much of the action took place inside the mind of its main character, it was hard to capture in a screenplay. At least five or six were written. Financing proved elusive.

Years went by. And Bridges and author Lowry watched as young-adult dystopian fiction became the next big thing in Hollywood. “The Hunger Games” debuted in 2012 to a huge box office, elevating Jennifer Lawrence to a mega-star; the sequel followed, with two more to come. The “Divergent” franchise launched earlier this year.

“It was kind of unnerving,” said Lowry, sipping tea in a Manhattan hotel this week.

And yet, both Lowry and Bridges agree, maybe it’s good that it took so long.

“At first I was saying, ‘Oh darn,’” Bridges said, using a saltier term. “We missed the boat! But really, our movie wouldn’t have gotten made without those movies leading the way.” (His father died in 1998; now Bridges himself, a co-producer, plays the character of The Giver.)

Lowry, who ranks third among Amazon’s top 100 authors, hopes the existence of the other films will increase the audience for “The Giver” - adding people as yet unfamiliar with the book.

“And as for fans of the book,” she adds, “we all so hope they won’t be outraged by the changes that were necessary. I’ve been trying to reassure them!”

Ah, the changes - always a balancing act. The story focuses on a boy, Jonas, who lives in a Community ruled by a Committee of Elders. All is based on the concept of Sameness. There’s no color, only black and white. There’s no emotion; sexual “stirrings” are blunted with daily medication. Most important, there are no memories of earlier times, for that would cause suffering. But Jonas is chosen to be the Community’s one Receiver of Memories, and as he learns about the world outside - called Elsewhere - it throws his own world into chaos.

In the book, Jonas is 12. In the movie, his age isn’t clear, but he’s played by Australian heartthrob Brenton Thwaites, who’s 25. This was done partly to create a teen romance, a change that initially deeply concerned both Bridges and Lowry. Now that they’ve seen the actors, they say, they’re happy with it.

Lowry sounds happier about another key change, one that gives Meryl Streep, as the stern Chief Elder, a substantial role. “I wish I could go back to the book and fill out that character now,” Lowry said.

But to many fans of the book, it’s perfect the way it is. Lowry learned of the book’s power during a recent appearance at Comic-Con, where she, and not the stars, proved the major attraction.

“Here I was with all these movie stars, and all the audience questions were for me,” she marveled.

But there’s a flip side to that reader passion: Some fans got angry when the first trailer came out in color (in the book, only Jonas can see color.)

“There was outrage,” Lowry said.