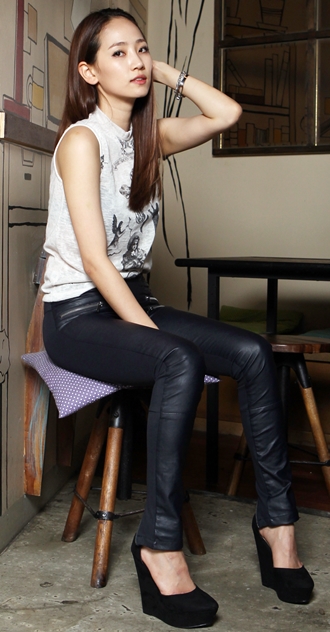 Ye-eun, a former member of the Wonder Girls, is set to leave behind her glory days and take on a new stage name, Ha:tfelt.

The 25-year-old singer has released a solo album - called “Me?” - that includes songs of an experimental nature, especially compared to tracks she released as part of the JYP Entertainment idol group.

The album’s title song “Ain’t Nobody,” which was inspired by rock ballads and based on electronic sounds, would not have been created without the singer’s persistence.

Ye-eun explained how her agency’s chief producer, Park Jin-young, tried to stop the musical direction she was determined to take.

“He just gave up in the end,” Ye-eun said in a recent interview with Ilgan Sports, an affiliate of the Korea JoongAng Daily.

Q. What was the core of the conflict?

A. [Park Jin-young] was worried that the music I wanted to do would not appeal to the public. I think he hated the thought that I could go through a similar failure as the one he experienced.

One day, I wrote him an 11-page letter. I told him I wanted to go through with this because it’s my life. I’m still too young to just walk a safe path. Many called [our fight] World War III. At the agency, I’m referred to as the female version of Park.

He also knows that we are very similar. Around 70 percent of the time we’re the same, but the differences from the remaining 30 percent are huge.

Do you think your song is hard to understand?

I did think about making it more easy to receive for the masses, but just making a more public-friendly melody doesn’t mean it will be loved by everyone. I just wanted to do my own music rather than produce a mediocre piece.

Does this mean you don’t want to be an idol star anymore?

What was it like to be a part of the Wonder Girls?

I was 18 when I debuted. We were getting popular day by day, but I was too busy to realize what was going on.

My physical as well as mental condition was deteriorating. There were too many work arrangements and I was lucky if I could get two hours of sleep.

I don’t remember what it was like, and that pretty much just sums up life back then.

Did you ever feel regret about trying to make it in the United States?

No. I still want to make it work in the United States. It was a chance for me to further establish my music. Also, we became much closer as members since we had no one else around us. We ate meals of seaweed and canned goods and took care of each other. We really became a family.

Have you ever blamed the members who left the group and got married?

Sun-ye has had a lonely life since she was young. I was just relieved she found someone who can always stand by her side because she lost her father early. I really congratulated her about her marriage. I think maybe it changed my way of thinking, because getting married doesn’t mean you can’t be a singer.

So-hee has had a thirst for acting, so it was right for her to do what she wanted to do. Even though she left the group, we will meet one day for sure.

What did it feel like being forgotten as many fans are cheering more for other girl groups in Korea?

If we stayed in Korea and never left for the United States, we may have stayed popular, but we would have never established such a strong friendship with one another within the group. We also got to appreciate our fans more. If we had stayed in Korea, we might have taken it for granted.