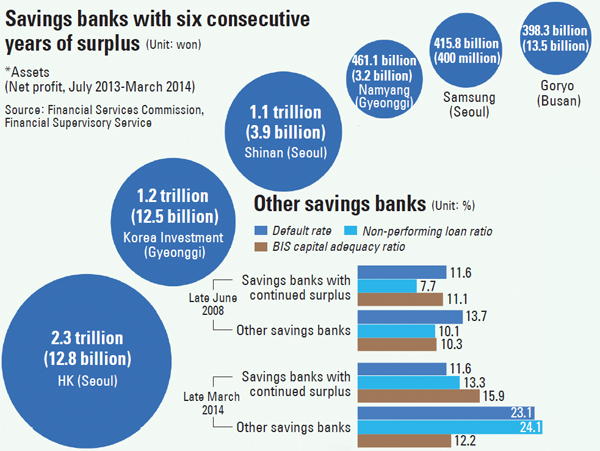 Earlier this year, a 40-year-old businessman who gave his name as Mr. A tried to expand his rental car business with a loan from a financial institution. But he found that it wasn’t easy for him to borrow money from the bank although he had 100 rental cars, each worth 30 million won ($29,127), to put down as collateral. He couldn’t find a financial institution that would accept automobiles as security for a loan.

As Mr. A was scratching his head, it came to him that he should visit Jinju Savings Bank based in South Gyeongsang. The bank had a loan product in which a consumer could borrow money with automobiles as security, so he was able to borrow about 200 million won based on the value of his cars.

“When we give out loans, we normally consider the borrower’s sales ability, personality and also what others think about the person,” said Kim Jae-hoon, director of management at Jinju Savings Bank. “As for the case of Mr. A, he was very well received by others.”

Local savings banks that have undergone major restructuring since 2011 are making a comeback by creating new products that are not offered by traditional banks. This new plan comes after the country’s savings bank industry hit rough waters over the past several years. The meltdown of savings banks was due to illegal practices including embezzlement and bribery, and made financial consumers concerned about their savings. At the time, savings banks offered higher interest rates than other financial institutions.

During the three years of restructuring led by the government and financial regulator, 30 of the country’s 105 savings banks closed. More than half of the top 20 savings banks including Hyundai Swiss, Solomon, Tomato and Jeil savings banks were gone. This led to a consensus among consumers that savings banks should not be trusted.

But some survived. After enduring aggressive downsizing and restructuring, 87 savings banks are still around and financial data show that 18 of them have been in the black for at least six years after the 2008 global financial crisis.

According to the Financial Supervisory Service (FSS), of the 18 that have posted surpluses for six consecutive years, 12 are small and midsize savings banks owned by individuals, and the total assets held by each owner is 500 billion won or less. Industry insiders say that one of the reasons they were able to survive the difficult times was because they felt more responsible for the management of the bank.

An analysis by the JoongAng Ilbo showed that many small and midsize savings banks focus on the region in which they are based and most of their business involves giving out loans to other small and midsize companies and individuals in the region. FSS data showed that at the 18 savings banks that have seen a surplus for six years, 80 percent of their loans were given in the region they are based in. 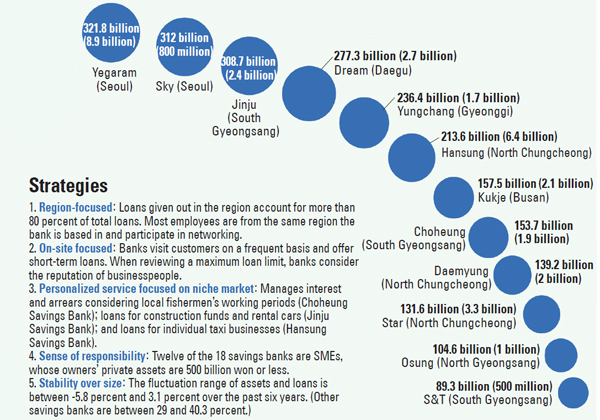 At the most successful savings banks, the president and employees are from the same region the savings bank is based in, and participating in networking events is part of their jobs. Many of the employees from Choheung Savings Bank have lived for about 50 years in South Gyeongsang and have been working at the bank for 25 years or more.

“Sales employees at our bank have their own exclusive zones that they are in charge of - mainly a 500-meter area - and they visit and meet with customers and potential customers on a daily basis,” said Lee Woo-dong, an auditor at Osung Savings Bank.

Interactions with their customers are useful when the time comes for them to conduct loan reviews based on information the employees’ have.

Jinju Savings Bank, for example, reviews consumers’ annual sales volume and asset conditions when giving out loans but gives extra points to people or businesses that are respected by others and have been in the region for a long time. The total added points determine the maximum loan amount.

Other savings banks such as Choheung and Hansung believe that even if a customer does not have sufficient collateral for the loans they want, if they have good ties with people in the area and a good personality, then the possibility is low for them to create heavy losses from a loan.

“Risk is very low for us because for us, it’s like giving out small amounts of loans to people that we know really well,” said Yoo Dae-byung, head of Kukje Savings Bank.

Choi Kun-ho, head of the mutual savings bank examination department at the FSS, noted that savings banks can make a steady profit if they play their role as a financial institution for low- and middle-income individuals.

“Small and midsize savings banks should set their base on their own regions,” Choi said.