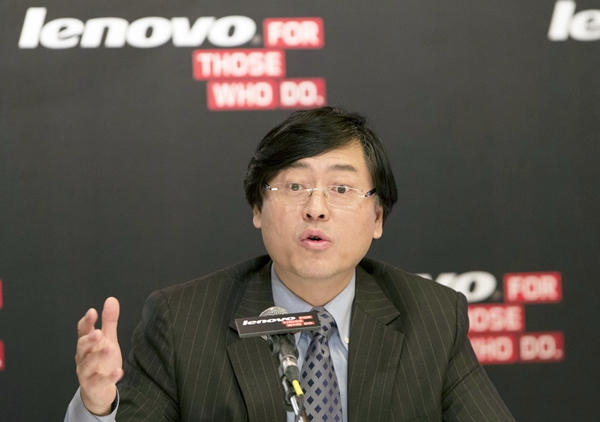 Net income climbed to $213.5 million in the second quarter from $173.9 million a year earlier, the company said yesterday, beating analysts’ estimates. CEO Yang Yuanqing also said in an interview that the company was negotiating with “multiple” U.S. government agencies to win approval for more than $5 billion of planned acquisitions.

With the PC market in contraction, Yang has kept the company growing by winning shares as he expands the smartphone and tablet computer businesses. After rapidly expanding mobile phone sales in its home base China, the company is extending sales into the Middle East, Africa and Latin America while pursuing deals to further bolster expansion.

“Looks like strength everywhere - their emerging markets business in both smartphones and PCs seemed relatively strong,” said Alberto Moel, an analyst at Sanford C. Bernstein & Company in Hong Kong. “The PC contraction is now heading into the late stages, and Lenovo is driving the consolidation to its advantage.”

Lenovo rose as much as 2.1 percent in Hong Kong, while the benchmark Hang Seng Index was little changed. The stock has gained 22 percent this year.

In January, the company announced plans to buy Google’s Motorola Mobility unit for $2.91 billion in cash and stocks. The same month, Lenovo agreed to buy IBM’s low-end server unit for $2.3 billion. The purchase will add a business with wider profit margins than PCs and give it about 14 percent of that market, the company has said.

Both transactions are in the process of getting regulatory approval, and the company hopes they can close by the end of this year, Yang said in an interview yesterday after earnings.

“We are making progress, but we definitely still have some things to do with multiple government agencies,” Yang said without elaborating on the remaining issues.

Lenovo reported that its sales had climbed to $10.4 billion in the period from $8.79 billion a year earlier. That beat the $9.9 billion average of 17 analysts’ estimates compiled by Bloomberg.