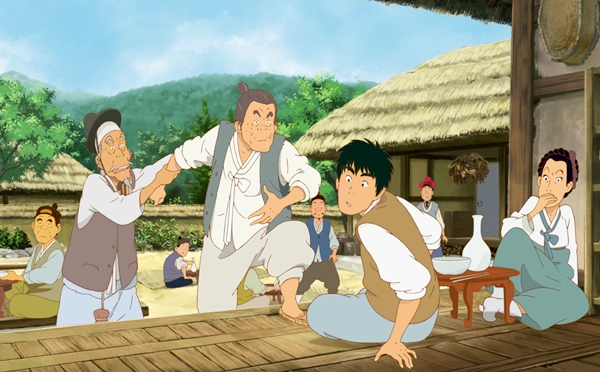 The work of 21st-century Korean writers Kim You-jeong, Lee Hyo-seok and Hyun Jin-gun are brought to life in the omnibus animation “Buckwheat Flower, A Lucky Day and Spring.” Provided by EBS

Animation has never been a genre reserved exclusively for kids, and with the release of “Buckwheat Flower, A Lucky Day and Spring,” the genre is set to win over older viewers who have a penchant for literature.

In an unprecedented move, the works of early 20th-century Korean writers Lee Hyo-seok (“When Buckwheat Blossoms Bloom”), Kim You-jeong (“Spring, Spring”) and Hyun Jin-gun (“A Lucky Day”) have been adapted into an omnibus animation.

Having been co-produced by TV broadcaster EBS, book publisher Gimm-Young and the animation studio Meditation with a Pencil, every nook and cranny of Korean society is examined from the authors’ perspectives.

The changing landscape that takes viewers from green country fields to a newly built-up and gloomy city is sure to tug on heartstrings.

In “Buckwheat Flower,” an older man’s gaze towards a younger one will evoke nostalgia, not just for years gone by but for the days when nature was all around and life revolved around physical labor and the yield of the land.

The sound of nature - from the gurgling brooks to the field of buckwheat flowers coupled with the lyrical narration - will transport viewers to a place they will have probably only read about in textbooks.

In “Spring,” an adaptation of a story by Kim, the charm of country life takes center stage as a young man is promised a daughter of a local farmer in exchange for labor.

While counting down the day until his bride-to-be - who is a decade younger than him - comes of age, there are scores of anecdotes that are told from a first-person perspective, as in the original writing.

The depiction of family ties and the nature of work, as well as the role of women and the human bonds that form in the unlikeliest of situations, is hilarious as much as it is touching.

The last film, “A Lucky Day,” is a tearjerker.

It is a tale about a rickshaw driver whose life is consumed by a profession that seems to be on its way out as modernity descends on Seoul.

The man’s routine, dictated by obligations to provide for his family and work at his grueling job, all against the backdrop of some of Seoul’s most iconic spots, is as moving as it is captivating.

The film marks the first time that the three works have been turned into an animation, and the old and the young will be able to revisit the foundation of Korean literature as taught at school.