Pope urges Koreans to come together

Pope urges Koreans to come together 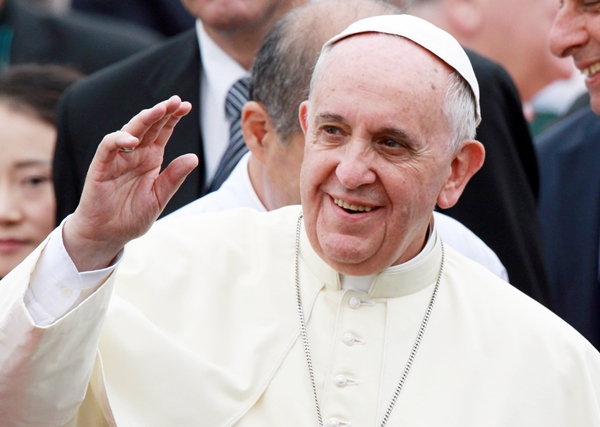 Pope Francis waves to the public in Seoul yesterday from a modest Kia sedan he requested. The pope will spend five days in South Korea meeting some of the country’s five million Catholics on the first trip by a pontiff to Korea since 1989. By Lee Young-hwan

Pope Francis advised Korea’s political and civic leaders to step up communication to work toward the common goal of tackling social issues, political divisions, economic inequities and other concerns.

“How important it is that the voice of every member of society be heard, and that a spirit of open communication, dialogue and cooperation be fostered,” said the Argentine pontiff during a 15-minute speech in English to some 200 governmental, political, business, cultural and media authorities at the Blue House, his first speech after arriving in Seoul yesterday for a five-day visit.

This is the pope’s first trip to Asia.

The 266th Bishop of Rome and President Park Geun-hye had a one-on-one meeting prior to the live, televised speech, hours after Pope Francis touched down earlier in the morning at Seoul Airport in Gyeonggi with some 300 delegates from Rome.

The pope, clad in a white soutane, also encouraged Koreans to show special concern for “the poor, the vulnerable and those who have no voice, not only by meeting their immediate needs but also by assisting them in their human and cultural advancement.”

The pope said the Korean Peninsula “has long suffered because of a lack of peace.” He said he could only express his appreciation “for the efforts being made in favor of reconciliation and stability on the Korean Peninsula, and to encourage those efforts, for they are the only sure path to lasting peace.”

Citing a phrase from the Bible, he said peace is not simply the absence of war, but “the work of justice.”

“And justice, as a virtue, calls for the discipline of forbearance; it demands that we not forget past injustices but overcome them through forgiveness, tolerance and cooperation,” he said. “It demands the willingness to discern and attain mutually beneficial goals, building foundations of mutual respect, understanding and reconciliation.”

Blue House officials said earlier that the pope’s visit could become a turning point to break the stalemate in inter-Korean relations. The presidential office said President Park had filed an official request for the pope’s visit to Korea five times since her inauguration in February 2013.

The pope also expressed hope that Korean democracy will continue to be strengthened and Korea will prove to be a leader in the globalization of democracy, which looks to the “integral development of every member of our human family.”

Before the pope spoke, Park delivered a much shorter speech.

“The visit to Korea of the pope, the top Catholic leader for the 120 million believers across the globe, is a great blessing for the Korean Catholic community and Koreans,” she said. “Koreans have been immensely hurt from the sunken Sewol ferry accident and the deaths of young soldiers. I wish that your visit could heal the injuries and pains.”

As of last year, Catholic believers in Korea totaled 5.44 million, accounting for 10.4 percent of the Korean population, according to the Catholic Bishops’ Conference of Korea. Buddhism is the most popular religion in Korea, with more than 10 million believers, followed by more than eight million Protestants.

The president added the Korean government is doing its best to take the path of peace and reconciliation by overcoming confrontation and getting away from the threat of war and nuclear weapons. She also pledged to offer humanitarian support for North Koreans and to boost civilian-level exchanges. 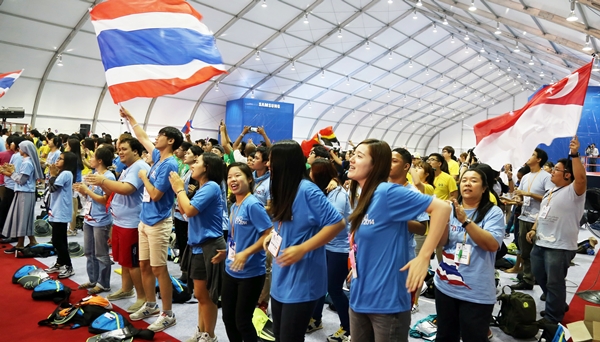 Participants in the sixth Asian Youth Day from more than 20 countries enjoy a welcoming ceremony yesterday at the Solmoe Sacred Place in Dangjin, South Chungcheong, the birthplace of the country’s first Catholic priest, Kim Dae-geon (1821-46). [NEWSIS]

The two leaders exchanged gifts following the speech. While Park gave the pope a framed cloth with traditional Korean embroidery, the pope presented framed copper-plate engravings of a map of Rome, which the Vatican library dedicated to the pope in celebration of the Great Jubilee of 2000.

The 77-year-old bishop of Rome is visiting Korea on his first trip to Asia since he took over the papacy from his predecessor Pope Benedict XVI in March 2013. He will attend the sixth Asian Youth Day, to be held in the diocese of Daejeon.

His trip here also marks the first in Asia since Pope John Paul II went to India in 1999. Pope Benedict XVI never visited this region during his eight-year papacy.

At 10:30 a.m. yesterday, the pontiff arrived at Seoul Airport in Seongnam, Gyeonggi, and was greeted by President Park, government authorities including Foreign Minister Yun Byung-se and 32 delegates of the laity from around the country. This was the first time President Park received a foreign visitor at the airport.

Upon walking down the stairs from the plane, the pope, beaming with his signature smile, shook hands with President Park, which was followed by a three-minute dialogue in a mixture of English, Spanish and Korean. A 21-gun salute was launched as Pope Francis marched down the red carpet to meet people awaiting him. Two children - a brother and a sister - clad in hanbok, Korean traditional clothes, presented the pope with a bouquet of flowers.

Assembled at the airport were 32 Catholic believers, each of whom shook hands with the pope. They included the elderly, teenagers, disabled in wheelchairs, North Korean defectors and descendants of some of the 124 martyrs to be beatified by the pope tomorrow at Gwanghwamun Square in central Seoul. Also included were some relatives of the victims of the April 16 Sewol ferry disaster.

When the pontiff was introduced to those relatives, who were crying, he said, “I keep the pains of the victims deep in my heart. It is heartbreaking.”

The touching consolation was reminiscent of Pope John Paul II. After stepping out of his plane in Seoul on May 3, 1984, the pope famously bent down and kissed the tarmac, as he had done on 20 other trips abroad. The gesture is widely remembered in South Korea, which was mourning the death of nearly 300 Koreans killed in two terror attacks the previous year. Seventeen Korean government officials died in a fatal bombing in Myanmar, a North Korean terror attempt targeting then-President Chun Doo Hwan. And on Sept. 1, 1983, all 269 passengers were killed when a Korean Air Lines aircraft was shot down by a Soviet jet in the Soviet Union.

Following the welcoming event, Francis left the airport in a black 1.6-liter midsize compact vehicle named Soul from Kia Motors, a model Korea chose after the pope requested the smallest car available. The model, among the second-smallest models from Korea’s top auto-making group, looked strange sandwiched between the much larger security SUVs.

The pope rolled down the window in the back seat and waved to the people as the vehicle moved forward.

He headed to the Apostolic Nunciature, the two-story residence of Archbishop Osvaldo Padilla, the Holy See’s chief diplomatic representative here. It is located near the Blue House in central Seoul. The pope will be eating and sleeping there throughout his five-day stay in Korea.

Pope John Paul II also used the residence when he visited Korea in 1984 and 1989.

Upon arrival at the residence, the pope said his first Mass in Korea.