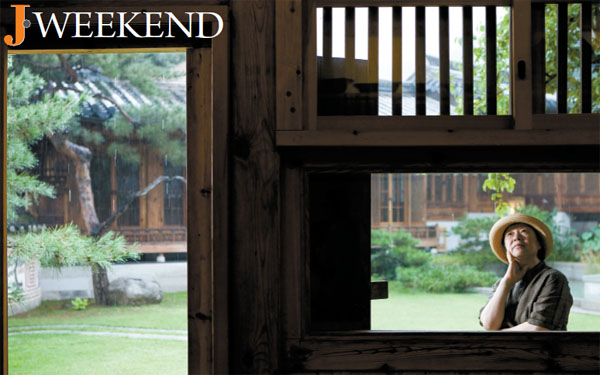 Director Jung Mi-sook looks at a building that was transported to the Korea Furniture Museum from a house once occupied by a relative of Queen Min of the Joseon Dynasty (1392-1910). By Kwon Hyuk-jae

Creating the Korea Furniture Museum in the scenic area of Seongbuk-dong, Seoul, might have seemed extravagant at the time, but it’s now considered worthwhile - the privately run facility has become a must-see destination for overseas VIPs.

The museum was introduced by CNN in 2011 as one of the most beautiful in Korea’s capital. It is a tranquil hideaway that lies in the heart of the metropolis. The land it occupies stands at 7,000 square meters (75,347 square feet).

Within the premises are a palace, a store room and a nobleman’s house. Each of these structures contains some 500 wooden furnishing items from the Joseon Dynasty (1392-1910). There are some 2,500 ornaments, too.

The JoongAng Ilbo, an affiliate of the Korea JoongAng Daily, visited the prestigious museum on Aug. 6 to meet the woman behind it.

Unlike the center itself, which puts a spotlight on every artifact, director Jung Mi-sook, 67, was a lot more modest about attention.

“Why take photographs of an old fogey,” said Jung.

She also confessed to feeling like a “sinner,” explaining that she felt guilty about not being able to preserve the hanok (traditional Korean housing) around the nation while bringing some of the old buildings here for the museum’s collection.

With the style and beauty of a woman from eras gone by, Jung is adamant that it is the public’s negligence that has led to the disposal of so many relics.

Jung keeps working with the hope that more of Korea’s cultural assets will reemerge out of obscurity.

But of all the pieces in the museum, the furniture Jung likes best are ones that have signs of wear and tear. There is a saying that if the rice chest is scratched, the rice tastes better - once something is gone, you think of it in a more favorable light.

Q. In July you had the first lady of Portugal visit. You’ve also had visitors like Martha Stewart, Brad Pitt and statesmen from around the world. What’s that like?

A.There are around 38 embassies nearby the museum and not one place that will help foreign dignitaries get a taste of Korea.

We got rid of the hanbok (traditional clothing), and hanok a long time ago. All we have left now is kimchi. All the foreign dignitaries I’ve met say the same thing: ‘I’ve never seen a traditional Korean house.” Although the last 50 years has been affluent, we have also lost so much of our own culture.

You’ve been building the museum since 1995.

It’s taken 15 years to arrive where we are today. It really has been like working on a puzzle, one piece at a time. I guess I owe it all to my ancestors; there is not a piece of furniture here that I actually crafted. My father-in-law, who was in the deep-sea fishing industry, gave me this land to start it all.

Although a hit with diplomats, the museum remains somewhat unfamiliar to the rest of the public.

Until I got the groundwork and framework for the museum set up I didn’t do anything except work. Not once did I go to a sauna or even get a massage. Since two years ago when we started operating on a booking system, we have been open five days a week [Tuesday to Saturday]. We can accommodate up to 150 patrons per day and are fully booked until September. They say we are a snooty museum, but that’s not the case.

When did you start collecting furniture?

In my college days. I majored in abstract painting at an art college and anytime I got extra cash I’d go to Insa-dong. Back then it was so cheap. Because I was a young person interested in furniture, merchants would practically give pieces to me for free. Eighty percent of the ornaments [at the museum] were purchased before I got married.

Why did you start your own collection?

During high school I went to Nashville, Tennessee, as a foreign exchange student on a scholarship program. That was back in the days when it was nearly impossible to even make phone call to the States. When I was there, the students would ask me, ‘What do you eat? And what do you wear in your country?’ That’s when I realized that foreigners are interested in Korean food and clothing.

Once I returned to Korea I started collecting furniture. There was even a time when I’d use a table for side dishes as a bookcase. Some things I inherited from my mother.

What makes our furniture so special?

There’s a story behind each and every item. The persimmon tree, maple tree, the royal foxglove tree - our wood has specific purposes [depending on the type of furniture it’s used to create], such as a desk, wardrobe, drawers.

From left to right: The dining room where Chinese Prime Minister Xi Jinping and his entourage were served.A collection of storage cabinets and book shelves made from pine trees as well as the Royal Foxglove tree. Typically, these shelves stored things like rice, red beans and books.

Then there’s the location factor. Depending on where the furniture comes from, the style differs. Even a distance of 30 minutes by car can mean very different furniture. A cabinet could be made in the Naju style, Yeonggwang style, Damyang style or Namyang style. There are some 70 styles. All except for Gangnam style.

It must be a lot of work just cleaning the furniture.

I call myself the housekeeping queen. I’ve always got a broom or a cloth in my hand. From dawn to dusk I’m cleaning, scrubbing, dusting and washing. It’s tiring work and I can never get a manicure. There were times my hands would get cut and bleed.

Then why do you keep doing it?

It’s because of the pride I have for our culture. I can’t just watch it disappear. Even foreign experts call our furniture contemporary art. It’s moderate in style, the edges and the lines come together perfectly and win compliments like “wonderful” and “amazing.” In such instances I like to reply, “this is how we’ve always lived.”

I’ve never calculated the cost. For the most part the items aren’t expensive. If they were, I wouldn’t be able to display them like this. The pricier items were purchased by my husband.

No. I just love culture. If I do get the chance one day, I’d like to start a cooperative movement [with North Korea] in Kaesong [a North Korean city near the border with the South]. The three national treasures I believe in are folk art, cloth artwork and artisan-crafted furniture. It would be wonderful to cultivate these areas and send the products to foreign embassies.

I’d also like to restore traditional houses, lecture halls and schools. The house of Kim Dong-soo in Jeongeup, North Jeolla, and the Oksan School in Gyeongju, North Gyeongsang, have recently been touched up. I told U.S. ambassador to Korea Sung Kim that although Korea is smaller than the state of Washington, there are more than 1,000 hyanggyo [traditional schools] built during the Goryeo era (936-943) and Joseon Dynasty (1392-1910) in the nation. If all these areas became museums wouldn’t they become tourist spots? Then it’d be impossible to say there is nothing to look at in Korea.

I hope there will be a cultural revival; it’d be the third following the ones brought about by King Sejong and in the days of Jeongjo.

Firstly, we started with a composite of museums and cultural sites around the museum, forming a sort of cultural cluster of alliances. We need the help of corporations, though. Just as the Italian Renaissance had the Medicis, we would need the same.