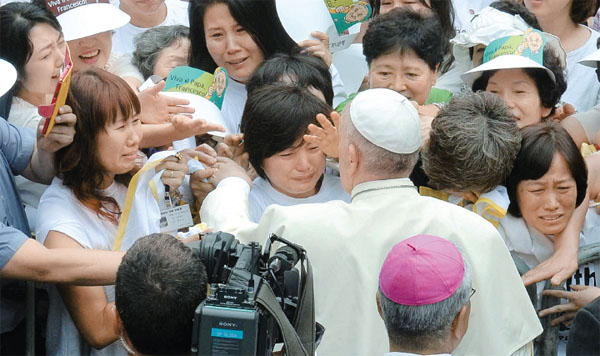 Pope Francis consoles relatives of Sewol ferry victims yesterday during a Mass for the Assumption of Mary at Daejeon World Cup Stadium. [NEWSIS]

DAEJEON - Pope Francis met with two teenage survivors as well as relatives of the victims of the Sewol ferry disaster before his public Mass yesterday at Daejeon World Cup Stadium, where nearly 50,000 Catholic believers came to witness the symbolic service, the first offered by a pontiff in Korea in 25 years.

The 77-year-old bishop of Rome is visiting the peninsula on his first trip to Asia since he took over the papacy from his predecessor Pope Benedict XVI in March 2013.

Among those who met with the pope were two fathers who had lost their children in the Sewol sinking and had just finished a 38-day, 500-mile pilgrimage around the country.

“I told [Pope Francis during our meeting] that we were being watched over by 300 souls whose lives should never have been lost [in that tragedy]. I asked him to say the Mass with those poor souls in mind, and he said he would,” said Kim Hak-il, who lost his son in the April 16 ferry accident, Korea’s worst maritime disaster.

The pilgrimage was held to demand the passage of a special Sewol law that would include the demands of the affected families. Kim said he gave the cross he had carried on his journey to Korean Catholic officials.

The pope’s 15-minute meeting with the families and survivors underscored his concerns over the sinking, which left more than 300 people dead, mostly high school students.

Upon landing in Seoul on Thursday, Pope Francis, who hails from Argentina, greeted the bereaved families and offered his heartfelt condolences for the tragic loss of so many lives.

During his Mass yesterday, which celebrated the Virgin Mary’s assumption into heaven, the head of the Roman Catholic Church appeared wearing the yellow ribbon that has come to symbolize the Sewol victims and survivors.

During their meeting, the families presented the pontiff with the pin, which he fastened to the left side of his chest.

“I was really stunned to see the pope come out with the ribbon, and to watch him [lead the service] with it on made us even more determined to seek our goal [to uncover the real reason behind the sinking],” said Kim Byung-kwon, the head of the association of Sewol victims who lost his teenage daughter in the disaster.

Standing before a packed stadium, Pope Francis, who is known for his humility and emphasis on eradicating economic injustice, conveyed words of solace and comfort during his homily to those still suffering from the Sewol tragedy.

He asked the Virgin Mary to embrace the souls of “those who lost their lives in the sinking” as well as “those who continue to be affected by this great national disaster.”

“May the Lord welcome the dead into his peace, console those who mourn and continue to sustain those who so generously came to the aid of their brothers and sisters,” he said in English during the Angelus prayer.

The fact that the pope delivered his prayer centering on the Sewol disaster in English while offering the rest of the Mass in Italian sparked speculation that he intended to emphasize the tragedy, though that was not confirmed by the Church.

Before his remarks on the Sewol, the pontiff touched on growing economic injustice, urging his followers to reject “inhumane economic models” that insult the integrity of men, women and young children.

“May we combat against unbridled competition that causes strife and selfishness as well as materialistic seduction that oppresses authentic spiritual and cultural values,” he said.

The 77-year-old bishop of Rome also called upon Catholics to shun inhumane economic models that create new forms of poverty and isolate the working class. Those systems, he said, only create a “culture of death” that “disregards God.”

His presence undoubtedly drew a large amount of people, many of whom did not have entrance tickets.

People flocked to the stadium’s fence to catch a glimpse of the pope and cheered when he appeared standing in an open-air car upon entering the venue.

In many parts of the city, banners adorned trees on the streets in celebration of the event.

Pope Francis’s encounter with the Sewol victims’ relatives also came at a delicate time, as the affected families and the ruling Saenuri Party stand at odds over the specifics of a special law designed to investigate the cause of the sinking and hold relevant suspects accountable.

While the victims’ families want to empower a fact-finding committee that would be established under the law with the authority to conduct criminal investigations and indict suspects, the ruling party has rejected such a demand, arguing that it would “shake the fundamentals of the judicial system.”

“To give indictment authority to the committee, a legal revision to the current criminal law is inevitable,” said Choi Hyun-ho, a law professor at Chungbuk National University.

The families, on the other hand, believe a special prosecutor appointed by the president could not withstand pressure from the Blue House, especially if the investigation were to target presidential officials.