Dutchman will not take charge of national team

Dutchman will not take charge of national team 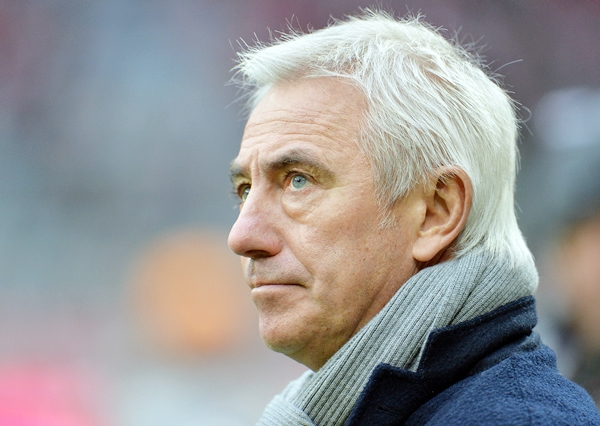 Bert van Marwijk of the Netherlands, who was negotiating with the country’s football governing body for the past two weeks to lead the Taegeuk Warriors, is not coming to Korea.

The Korea Football Association (KFA) said in a press release yesterday that negotiations with the 61-year-old Dutch coach broke down, so it is arranging new meetings with other candidates. The KFA will hold a press briefing today to explain the details of its talks with Marwijk at its headquarters in Jongno, central Seoul.

On August 7, KFA technical committee chief Lee Yong-soo said in a press briefing that he offered Marwijk a contract to lead the national football team, after it struggled in the 2014 Brazil World Cup with a record of one draw and two losses. Lee said at the time that the atmosphere was positive in a two-hour meeting they had in Amsterdam and that Marwijk seemed highly interested in the job. He hoped the contract would be finalized within a week, but instead, the KFA and the Dutchman couldn’t agree on several details in the contract. Tax problems related to the coach’s annual salary and the duration of his stay in Korea were thought to be the biggest barriers.

According to several Dutch media reports, Marwijk thought the tax on his salary was too high after he discussed it with his accountant. Sources in the KFA said he was going to receive about 2 billion won ($1.96 million) per year, which would have been the highest salary in the history of the Korean national football team.

The other problem was that the coach wanted to spend less time in Korea. In interviews with Dutch media, Marwijk said he wants to stay in Europe to keep track of Korean players in European leagues, but sources said the KFA was opposed to the plan because they didn’t want the coach to come across as undedicated to Korean fans who really want to see the new coach work hard to improve the team after its terrible performance in Brazil. The KFA also thought that players in the country’s professional league, the K-League Classic, might be disappointed with a coach who only shows an interest in Koreans who play in Europe. Marwijk also wanted to stay in the Netherlands to spend more time with his family.

It is unknown who is left on the KFA’s list of potential coaches. But considering several conditions that the football governing body deemed essential in a national coach - including the experience of leading a nation to at least the Round of 16 in a World Cup and English fluency - not many coaches are currently in the market. Possible candidates are Fernando Santos of Portugal, who led Greece to the second round in the Brazil World Cup, incumbent China coach Jose Antonio Camacho of Spain, Raymond Domenech of France and Milovan Rajevac of Serbia who led Ghana to the Round of 8 in the 2010 South Africa World Cup.

Santos may be a good option for Korea, since the price tag attached to him is known to be about 700 million won. But he can’t coach the team’s first six A-matches, due to a ban handed down by FIFA after he was ejected from Greece’s Round of 16 match against Costa Rica for aggressively protesting against a call made by the referee.

There are several available coaches from South American nations, such as Jorge Luis Pinto of Colombia, but they don’t speak fluent English.

Whatever the reasons for the break- down in negotiations with Marwijk, Korea must now play its two upcoming friendly matches against Venezuela and Uruguay in September without a head coach. The KFA said that Korean coaching staff who will assist the new coach might manage the matches. Lee Im-saeng, a former national team player who currently coaches a Singaporean club and former Seongnam FC Coach Shin Tae-yong are being considered for coaching staff positions.