Ki drives Swansea win with 1st goal of the season

Ki drives Swansea win with 1st goal of the season 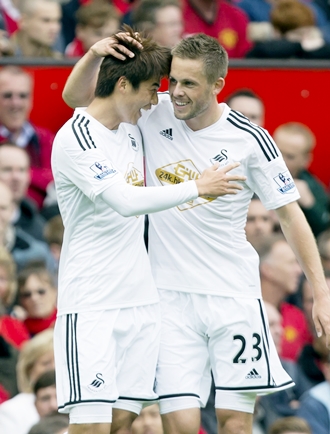 Van Gaal failed to usher in the bright new era expected at United on Saturday, watching in frustration as the team opened the season with a home loss for the first time in 42 years.

The 20-time champion slumped to a 2-1 loss against Swansea, a team even David Moyes managed to beat comfortably a year earlier at the start of his short-lived reign.

But the hosts lacked organization in defense at Old Trafford, allowing Gylfi Sigurdsson to score the winner from close range in the 72nd minute after United captain Wayne Rooney’s overhead kick canceled out Ki Sung-yeung’s opener.

In Van Gaal, United hired a proven manager who has won titles at Barcelona and Bayern Munich. But the Dutch coach was given a clear indication of just how difficult it will be to turn a team that finished seventh in May into a top-four finisher again.

“It’s a very bad day for us ... we didn’t play as a team,’’ Van Gaal said. “I saw a lot of players looking very nervous, making the wrong choices and that is a pity.’’

But it was a victorious opening day in a new job for Mauricio Pochettino, whose Tottenham side won 1-0 at West Ham after debutant Eric Dier scored in stoppage time.

Tottenham’s north London rival, Arsenal, also profited from a stoppage time goal as Aaron Ramsey scrambled the ball over the line to clinch a 2-1 victory over Crystal Palace. Arsenal’s first opening-day win since 2009 came after Laurent Koscielny headed in an equalizer to cancel out Brede Hangeland’s opener for Palace, which is without a manager following Tony Pulis’s surprising departure on Thursday.

There were mixed fortunes for the Premier League newcomers. Queens Park Rangers, which made an instant return to the topflight, lost 1-0 at home to Hull. But Leicester, which has been away from the elite for a decade, earned a point by drawing 2-2 with Everton.

Sunderland and West Bromwich Albion, who both flirted with relegation last season, opened the new campaign by drawing 2-2. Aston Villa, whose owner Randy Lerner is trying to sell the club, began with a 1-0 win at Stoke.

The first goal of the season came 28 minutes into the game at Old Trafford after United failed to fix its defensive deficiencies in the offseason. Sigurdsson picked up the ball from Nathan Dyer and squared for Ki to score.

Van Gaal said his team had felt tense in the first half, feeling the pressure to deliver. But Rooney dragged the hosts back into the game, hooking the ball over his head from Phil Jones’ flick-on in the 53rd.

United couldn’t produce a second, with Rooney sending a free kick against the goal frame, and Sigurdsson was able to bundle the ball over the line after Jefferson Montero’s cross wasn’t cleared.

Although defender Kyle Naughton was sent off in the 29th for handling, Mark Noble put West Ham’s resultant penalty wide. And after West Ham was also reduced to 10 men in the second half when center back James Collins received a second yellow card, Dier rounded goalkeeper Adrian and slotted the ball into an empty net.