Ryu put on disabled list due to muscle injury

Ryu put on disabled list due to muscle injury 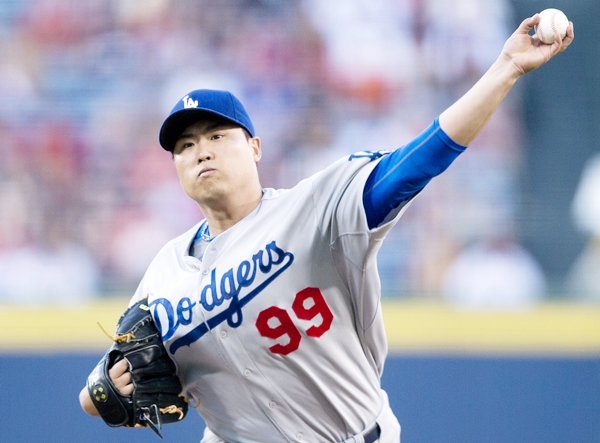 Los Angeles Dodgers starting pitcher Ryu Hyun-jin has been placed on the disabled list for the second time this season.

Dodgers manager Don Mattingly told reporters on Friday that the 26-year-old lefty, who exited early in his start on Wednesday against the Atlanta Braves, was placed on the 15-day disabled list with a strained right gluteus muscle.

After Ryu delivered ball four to B.J. Upton in the sixth inning, he winced in pain and immediately waved to the dugout to call out Mattingly and the team’s trainer. After chatting with them and moving his right leg up and down for about a minute, Ryu left the game.

The decision was made after he received an MRI exam.

“The doctor told me it isn’t that serious,” Ryu told Korean media. “My team decided to sideline me and I agreed with the decision. What I can tell right now is that the injury is getting better every day, so I expect to go back to the field soon. If the level of the pain was a 10 on Wednesday, 10 being the highest, it is now about a seven.”

Ryu said he feels sorry for the team since they are having a tough time dealing with injured players. The Dodgers lost fifth starting pitcher Josh Beckett earlier the month and third baseman Juan Uribe on Saturday.

“Since we still have September, I will try to prepare for the comeback,” Ryu said. “I will definitely be back in September.”

Ryu is 13-6 with an ERA of 3.28 and 122 strikeouts in 137 and one-third innings. With Ryu down, Kevin Correia, whom the Dodgers acquired via a trade with the Minnesota Twins earlier the month, will step in.

Ryu was expected to break former Dodger pitcher Park Chan-ho’s 18-win record, the most wins by a Korean pitcher in a single season in 2000, but that feat will now be hard to reach.