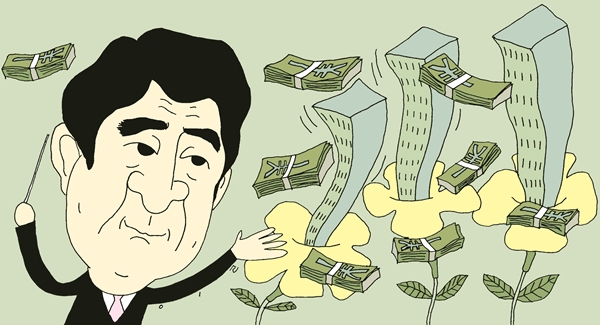 Maybe it’s time to stop dismissing the risk of stagflation in Japan.

I’ve raised this risk a couple of times during the last 12 months as inflation rose without commensurate increases in wages or productivity. But yesterday’s ugly gross domestic product report suggests it’s a clear and present threat to Japan’s best chance at economic recovery in more than a decade.

The collective reaction yesterday to the 6.8 percent plunge in second-quarter growth seemed to be: “Relax, it could’ve been worse.” After all, many economists were braced for a 7 percent-plus contraction following an ill-timed and ill-conceived consumption-tax increase in April. Yet the detail of the report - and the balance of other recent data - point toward a period of sluggish growth, at best, and continued inflation gains.

Thanks to the Bank of Japan’s unprecedented easing and the yen’s 16 percent drop during Prime Minister Shinzo Abe’s term, consumer prices rose 3.6 percent in June from a year earlier. That wouldn’t be a problem if incomes and productivity weren’t walking in place. The 5 percent drop in inflation-adjusted consumption in the second quarter, meanwhile, was even greater than the recession-causing sales-tax hike of 1997, observes Richard Katz, publisher of the Oriental Economist Report.

There’s evidence, too, that the gains in corporate profits that the weaker yen delivered to manufacturers is fading.

Last week, Toyota stuck with a forecast for net income to drop from last year’s record $17.8 billion. Now, Japan’s largest carmakers are hunkering down for slumping domestic sales, highlighting the damage to demand by the 3 percentage point increase in the sales levy. Panasonic also is struggling as its fixed costs rise and demand for electronics in Japan wanes.

Optimism that deflation has been defeated ignores the sources of today’s price increases. With the nation’s nuclear reactors switched off for safety reasons, Japan is importing expensive energy with devalued yen. This, along with doubts about the trajectory for household demand, helps explain why companies aren’t increasing wages to offset the effects of inflation. Nor will they in the months ahead as Abe mulls another tax increase in 2015.

“At the very least, the latest figures provide more evidence of the fragility of the recovery, which will in turn lead to more pressure on Prime Minister Abe and BOJ Governor Haruhiko Kuroda to act,” says Tobias Harris, a Japan expert at Teneo Intelligence.

What to do to head off stagflation risks? The BOJ could pump more liquidity into markets in the short run. But that might do nothing to revive them while exacerbating Japan’s inflation woes. It’s even more important for Abe to get on with the structural reforms needed to make Japan more competitive and productive: accelerate efforts to reduce trade barriers; overhaul taxes; loosen labor markets; tighten corporate governance; and encourage more startups that create new and good-paying jobs.

So far, Abenomics has meant lots of stimulus and no deregulation, a recipe that has boosted inflation more than growth or confidence. If Abe doesn’t act faster to reverse this pattern, his tenure may be remembered more for misery than recovery.