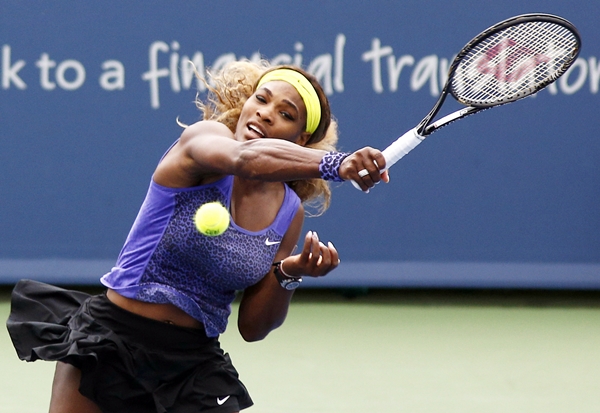 Serena Williams returns a volley to Caroline Wozniacki during their semifinal match at the Western & Southern Open on Saturday in Ohio. [AP/NEWSIS]

Serena Williams came back to advance to the Western & Southern Open final Saturday as Roger Federer moved into position for his sixth title in the tournament.

Williams lost a set for the first time in the tournament and committed 41 unforced errors, 20 more than Wozniacki. Williams will face ninth-seeded Ana Ivanovic in the final. Ivanovic beat fifth-seeded Maria Sharapova 6-2, 5-7, 7-5 in a night match.

Williams beat the 12th-seeded Wozniacki for the eighth time in nine career matches, overcoming a tight lower back.

“It was definitely feeling super tight in the match,’’ she said. “That’s when I really relaxed, to be honest. By then I was able just to go for more shots and come to the net more and just kind of not have anything to lose.’’

She also tried to shorten points with booming serves, leading to getting just 58 percent of her serves in play.

Williams and Wozniacki both struggled with their serves, leading to a combined 15 service breaks, including the first five games of the third set. Wozniacki was broken in eight of nine service games in one stretch and connected on just 54 percent of her first serves.

“I didn’t get many first serves in,’’ Wozniacki said. “When I did, they weren’t placed very well. It’s frustrating, because you lose a set 6-4 in the third and you only hold serve once.”