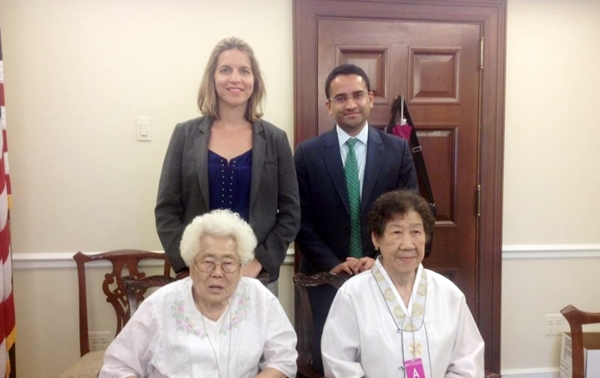 The Catholic America Magazine on June 28 published an article on comfort women victims by Dennis Halpin, a visiting scholar at Johns Hopkins University. Halpin wrote that “Comfort women is the euphemistic term for the tens of thousands of girls and young women who were cajoled, coerced, kidnapped, sold or captured into sexual slavery by the Imperial Japanese Army.” He refuted the Japanese rightists’ argument that the comfort women were voluntarily recruited for money. He also mentioned his personal experience.

“Forty years ago, as a Peace Corps volunteer in Seoul, I was told by members of the local community to stay away from a shabby little grocery store that was run by ‘a woman who had been a Japanese whore.’ Abandoned and usually without their family, the returned comfort women struggled under harsh, unwelcoming conditions,” Halpin wrote. “Pope Francis can help to raise up the comfort women survivors with his embrace. His compassionate presence makes him well suited to the task of meeting the comfort women and giving them God’s message of love, hope and acceptance that was denied to too many.”

A month later on July 30, two victims of wartime sex slavery, Lee Ok-sun and Kang Il-chul, visited the White House and discussed their tragic lives for two hours. One attendee said that no one could dare interrupt when the victims were speaking. Lee showed wounds on her leg and said that a Japanese soldier hacked her with a sword when she ran away and got caught. Kang said her family was gone when she returned home. Director of the White House Office of Public Engagement Paulette Aniskoff wiped away tears. In the evening, I met the victims at the Korean American Grassroots Conference, and Lee told me “I am heartbroken.”

Of course, it would be naive to think that the meeting with White House staff would bring a decisive solution. Nevertheless, the comfort women issue has become a human rights concern in the international community. Aniskoff said, “It is deplorable and clearly a grave human rights violation of enormous proportions,” and nothing comes before human rights. But it has taken too long to come this far. Until a decade ago, Korean society put a taboo on the comfort women issue. We had failed to distinguish the assaulters from the victims and were only concerned about shame.

Pope Francis met with the comfort women victims during his visit to Seoul. Regardless of religion, we all hope that the pope would embrace their pains and comfort their souls. His blessing would also heal the shame among Koreans who once considered the comfort women embarrassing.

The author is a Washington correspondent for the JoongAng Ilbo.