Cisco exec sees company as the connector of all things

Cisco exec sees company as the connector of all things 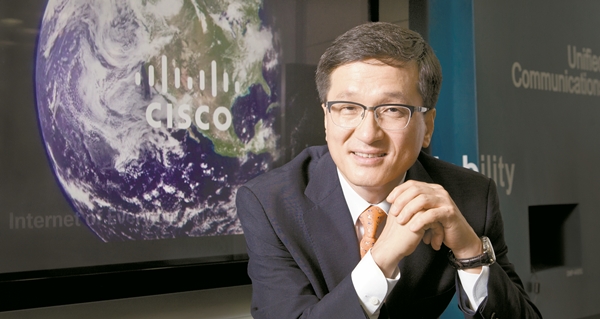 Chong Kyung-won, general manager and vice president of Cisco Korea, talks about the Internet of Everything. By Park Sang-moon

Most people call it the Internet of Things (IoT), but Cisco is focused on the Internet of Everything. Over the past 25 years, Cisco has been making revolutionary contributions to the Internet community by connecting networks through routers.

For Cisco, the Internet of Everything means an infrastructure for exchanging information and communicating between things and people by connecting them with the Internet, and installing censors and computer chips in objects such as home appliances, lights, thermometers, door locks, cars and security cameras.

Cisco has humble beginnings. It was established by two friends studying computer technology at Stanford University in 1984, but by 2013 it had become a global business with $48.6 billion in revenue.

Cisco is the No. 1 company in the world for routing, telepresence, wireless LAN, switching, voice, web conferencing and the security market by market share. It also has 70,000 partners worldwide.

Since its founding, it has acquired 170 companies, and now holds 14,000 patents and invests $5.9 billion in research and development each year.

Its Korean branch was established in September 1994, and now has seven offices and 800 partner companies in Korea.

The recently appointed CEO of Cisco Korea, Chong Kyung-won, talked to the Korea JoongAng Daily about Cisco’s strategies and roles in Korea for the next decade.


Q. How would you define the Cisco of today and of the future while the Internet environment is constantly changing?

A. Many sectors in the IT industry are converging and it has now become much more difficult to draw clear lines among industries.

In that sense, Cisco obviously has had networks as its core business, and it is converging and integrating based on networks.

Our mission and vision is to connect the 99 percent, for which there is a huge market and opportunity for us.

Although many companies say they make convergences and provide total solutions through convergence, networks are the core to the solutions.

Thus, Cisco is in the best position to connect the other 99 percent of the world.


Speaking of networks, many network firms are chasing after Cisco, especially emerging network companies such as China’s Huawei. Who are your competitors and partners?

Strictly speaking, everyone is a potential competitor in an environment where all IT businesses are being converged.

There are neither permanent enemies nor permanent friends in business when it comes to cooperation and competition.

The competition is whoever can take the lead in connecting the 99 percent.

In the case of Amazon, it could succeed in IoT with its cloud service and Apple might do that with devices. Cisco is connecting things with networks. In that sense, if cooperation is needed, we will cooperate.

Our business strategies are to expand, converge and develop. When we decide that it is better for us to outsource the technology, we acquire businesses through M&As or partner with them.


Why has Cisco Korea put so much emphasis on its security business recently?

In connecting the 99 percent of unconnected things, the biggest issue is security. Even in the past, when connecting the network inside companies, there were issues such as hacking.

It is impossible to connect everything without ensuring security, as it is the most important component of IoE. Cisco will focus on investing in the security business.

In addition, I believe that in security, network is once again most important. Cyberattacks and hacks happen through networks because all data are transmitted through networks. Telecommunication enables security in both cable and wireless.

In fact, it is not a new business for Cisco, since Cisco is the No. 1 company in the global security market by market share.

However, most of our products were imbedded in network equipment so our security business was not generally known to the public.

For instance, we have had security software ASA ever since we began selling routers and switches. Recently, we have been adding more security technology that would prevent APT attacks and detect intelligence cyber threats.

We recently acquired the Czech security company Cognitive Security, which has advanced technology in that area.

From left: During Girls in ICT Day 2013, Cisco encouraged teenagers to pursue technology careers. Cisco Korea General Manager and Vice President Chong Kyung-won delivers a speech at Cisco Connect Korea 2014 held at COEX in Samseong-dong, southern Seoul, in April. Employees of Cisco Korea pose for a photo after participating in Cisco BMW&G Day, which encourages employees to use the bus, bike, metro or walk as a step toward protecting the environment. BMW refers to bus, bike, metro and walking.Provided by the company

It is forecast that Internet traffic will increase explosively due to mobile and cloud communicating in the future. In what areas do you think the traffic will mainly increase?

The amount of data has been gradually increasing from web searching, Internet banking, digital voice and videos.

However, the biggest surge in data will happen in the IoE, when the 99 percent of things are connected with the Internet.

For instance, let’s say that we attach sensors on all the equipment of an airplane and collect and transmit the real-time data to let people know whether the plane is safely flying, as an example of the Internet of Things.

For one airplane to fly for 30 minutes and transmit the data, 1 terabyte is needed. There are countless airplanes flying every day, which means that the data generated by IoT or IoE would be tremendous.


How can we store this amount of data in the future?

That is an interesting point, because we won’t have to store data. Why do we store data? The reason for storing is to analyze it because we do not have the intelligence to analyze them in real time.

However, if there was intelligence that could analyze all data in real time, we would be able to get rid of them immediately after using them for analytics.

For instance, if a plane flying for 30 minutes generated 1 terabyte of data last year, why would we need to store last year’s data? We wouldn’t need 1 terabyte, which is a huge amount. If there were some mysterious symptoms, we would only need the data for that part, not the whole terabyte of data.

Currently, we need them all in order to analyze big data. But, once again, if that information could be communicated and analyzed at the right time and place, we will not need the bulk data.

In big data, communication and analytics are more important than storing. Korean firms tend to have strong preference to store everything. However, we will need to change our ideas when the amount of data becomes explosive.

If traffic control centers could communicate by analyzing the traffic by several terabytes of data in real time to provide information of when and where the most congested times and areas will be, it will be much more useful than storing data.

Cisco has that technology already, which is called “data in motion.” Instead of cloud services, we have the so-called fog computer that gives analytics in real time through intelligence, so we do not have to store them in the cloud and then gather them to discover facts.


What was Cisco’s strategy in becoming a global IT giant in the fast-changing IT industry, where a product’s life cycle is so short?

After all, the key is always innovation. Cisco is 30 years old, established in 1984, and the life cycle in the IT industry is usually so short that it is considered a long-life company. Countless IT start-ups have appeared and disappeared in the meantime.

The core is innovation. Companies must be able to make changes. If a company succeeded with equipment, or certain products and technology, they tend to settle for the status quo.

Many start-ups tend to not be able to make changes and that’s when they miss the next trend.

In other words, continuous changes and innovation are the key to becoming a long-lasting company in this industry.

Nokia succeeded with mobile phones, but failed to move on to the smartphone market. That is because they did not make destructive change. It is not easy to do. Whether you can give up on the present and move on to the next area is the secret to longevity.

Although Cisco does not do everything well, it innovates quite well compared to others, if you look at the 172 companies that Cisco has acquired and merged with to converge our business and take us to the next stage.

Some companies are not skilled in M&As, and have difficulty integrating separate businesses and synergizing. In Cisco’s case, it has the ability to accept new things and internalize them.


Is the Korean market a testing ground for Cisco since it is an IT powerhouse and a very competitive market?

The Korean market is surely a very competitive market and the demands of customers are very high. This market is a testbed and also a very important market for us.

Although it is a small market with a population of 50 million, when companies succeed in Korea, they can apply that to anywhere else in the world.

European countries can sell the technologies that we develop and BRICS countries can definitely utilize our technology. In that sense, Korea is very much advanced.

We can compare our market here with the Taiwanese market. Taiwan is very similar to us, although smaller, however in the perspective of a global company, the market has no merit as a testing area. It is more like a place where we sell products and services.


How are you cooperating with Korean businesses and how do you contribute to the Korean market?

It has been 20 years since Cisco began operating in Korea, and I believe that Cisco Korea contributes to Korea’s technology and economy as a global corporation.

I often communicate with headquarters [in the United States] and tell them that we should cooperate a lot with Korean companies.

Korea is No. 1 in the world in terms of network technology, providing LTE and LTE-A services. It is even more advanced than most companies in the United States and it is the only country that talks about 5G at the moment, while LTE services are not yet available in many other countries.

So I believe that Cisco must cooperate with Korean companies with excellent technology to either acquire that technology or partner with them so that together we can sell the products and services overseas through a joint project.

We are also doing an IoE project with the Korean government. What the government wants is also for Cisco and Korean companies to develop new solutions with IoE technology to sell them globally as LCD and smartphone businesses decrease and to incubate start-ups. 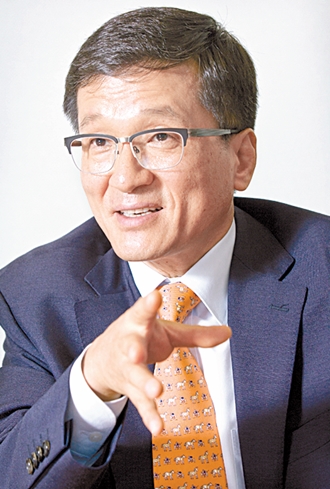