Front line of phone war is no longer innovation

Front line of phone war is no longer innovation

In September, the two giants in the global smartphone market, Samsung Electronics and Apple, will both release new smartphones. With Chinese companies popping up as rivals, the two seem determined to arm themselves with cutting-edge technology and innovations to outdo each other and their new competitors.

Despite its struggling sales in China during the second quarter, Samsung Electronics had the biggest market share in North America and will attempt to keep its market dominance. In line with its efforts, the company will debut its Galaxy Note 4 on Sept. 3 before the kickoff of the IFA exhibition in Germany. The phone will be launched in Berlin, New York and China.

Six days after Samsung reveals its Galaxy Note 4, Apple will release the iPhone 6. According to reports from The Wall Street Journal and Bloomberg, Apple will launch the new iPhone at its Cupertino, California, headquarters and will begin selling it on Sept. 19.

September is shaping up to be the month of the flagship device war. Apple even ignored founder Steve Jobs’ philosophy in its search for success with the iPhone 6. Jobs, who said our fingers are “the best pointing device in the world,” stressed the importance of handy screens of about 3.5 to 4 inches.

However, the number of consumers looking for a phablet - a combination of a tablet PC and a smartphone - is constantly rising, so Apple decided to enlarge the phones’ screen to between 4.7 and 5.5 inches. Apple also added a health app, HealthKit, to its new iOS 8 operating system. The iPhone 6 debut may coincide with the launch of Apple’s first wearable device, temporarily called the iWatch. “For its competition with Samsung, Apple is trying to build its ecosystem within the wearable device market,” an IT industry insider said.

Samsung is also preparing for the battle, and launched the Galaxy Alpha on Wednesday. Galaxy Alpha, the first Samsung phone with a metallic frame, could be seen as the company’s strategy to counter the iPhone 6. Galaxy Alpha is 6.7 millimeters (0.26 inches) thick, thinner than the Galaxy S5 and iPhone 5S, and weighs 115 grams (0.25 pounds). Its high-definition display is 4.7 inches and its camera shoots at 12 megapixels. It runs on Qualcomm Snapdragon 805, which supports broadband LTE-A in Korea and Exynos abroad.

The fire between Samsung and Apple was fueled last quarter from challenges brought by Chinese companies. According to an Aug. 5 report by Canalys, a market research group, Xiaomi ranked No. 1 in the Chinese market during the second quarter, taking up 14 percent of the market share. Xiaomi was followed by Samsung, which had been No. 1 in China since the fourth quarter in 2011, with 12 percent, and Apple didn’t make the top five. It’s no surprise that Samsung was concerned by the report. 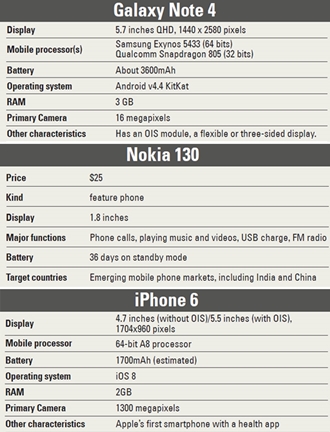 “[China] grew so fast. Who knew it would catch up this fast?” said a Samsung employee at Samsung Electronics headquarters in Seocho-dong, southern Seoul.

“Even if they catch up, I thought [Samsung] would keep the first place for longer,” added another. “Ah, [China] should have rejected a market economy and remained a Communist country!” said a third.

The combined market share of China’s three major mobile phone companies, Xiaomi, Lenovo and Huawei, has jumped from 11.4 percent in 2012 (Xiaomi with 4.8 percent; Lenovo with 1.8 percent; and Huawei with 4.8 percent) to 17 percent in the second quarter of this year. The loss in market share reflected a poor performance for Samsung and Apple, which led to the tech giants’ truce in their patent wars, ending all lawsuits outside the United States.

The three Chinese companies have been releasing high-quality smartphones for comparably cheap prices. This changed the ground on which smartphone manufacturers compete. Innovation may have previously been the key to competitiveness, but now price and speed are equally important. A multidirectional smartphone war - in which creativity, function, design, retail price, launch dates and markets all play important roles - has begun.

Premium smartphones that focus largely on innovation and design are losing their appeal. Most smartphones have caught up with the technology that was considered shocking in the early stages of the iPhone.

“The quality of the display, camera functions and flexible displays are grounds on which leading companies can differentiate themselves from others now, but the innovation evolution that we saw in the last two, three years has finished,” said Kim Ji-san, a researcher at Kiwoom Securities.

Instead, traditional manufacturing power has become important again. In order to increase market share in regions with huge demand for phones, such as China, India, Africa and Eastern Europe, cost reduction is key. It’s more important to produce midrange smartphones than premium phones in the 1 million won range.

“Chinese smartphones have their competitive edge with affordable prices now but their production cost will increase by at least 50 percent once they face the patent issues after advancing into the global market,” said an industry insider. 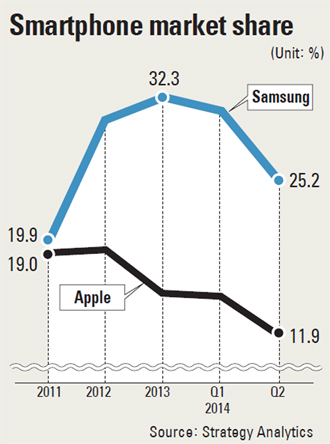 Despite the world’s smartphone obsession, Microsoft has opted for low-end phones. The company released its feature phone, Nokia 130, on Aug. 11, making it the first low-end phone released by Microsoft since the company acquired Nokia. The price? $25. The phones will go on sale in India, China and Nigeria around next month. Microsoft’s strategy is to target emerging countries with growing cell phone markets.

The Nokia 130 does not allow Internet access but can play music and videos. The display is 1.8-inches wide and the phone can be charged with a USB. The biggest upside to the Nokia 130 may be its battery, which can last up to 36 days without being charged.

Microsoft also recently released the Lumia 530, a low-end smartphone that operates on the Windows system. The phone’s price before taxes and subsidies is $115.

“It is estimated that at least one billion people in the world still do not have a mobile phone, while at the same time there is increasing demand for reliable backup phones in both mature and high-growth markets,” said Jo Harlow, corporate vice president for Microsoft’s phones.

According to Fitch, a global financial information services company, Samsung and Apple’s global smartphone shipment market share will be at 25 percent and 14 percent, respectively, this year, a dip from last year’s 31 percent and 15 percent. In emerging markets, “cost is relatively more important than global brand strength or cutting-edge technology,” Fitch said.

“We expect the big two’s combined smartphone shipment volume to stagnate at around 450 million to 460 million units in 2014 from 467 million last year,” the company added.