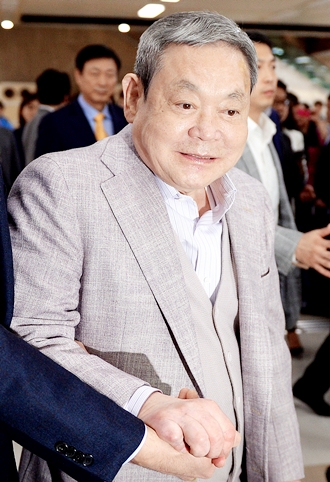 100 days have passed since Samsung Electronics Chairman Lee Kun-hee was hospitalized with an acute myocardial infarction on May 10.

“We have observed the chairman’s condition for about two months since June 18, when we explained that Lee had his eyes open for eight to nine hours a day,” said Lee Joon, head of communications at Samsung Group’s future strategy division at a briefing last Wednesday at Samsung Electronics’ headquarters in Seocho-dong, southern Seoul. “The medical staff expect that the chairman will continue to recover steadily. Recently, there has been a rumor that the chairman passed away, but we believe it is not right to respond to such rumors every time,” he added.

On Aug. 11, a rumor that Samsung VIPs were gathering at Samsung Medical Center spread through messages and social networking sites such as KakaoTalk.

“Also, we won’t tell you about the details since we believe that the specific illness and treatment of Chairman Lee are private,” Lee said.

“Although Lee is not yet in the stage of communicating, the number of times he makes eye contact with people and moves his hands and feet are increasing,” said a medical staff member at Samsung.

The staff added that Lee also had his eyes open for seven to eight hours per day last month and responded to external stimuli several times in June.

At the briefing, Lee added that Choi Ji-sung, chief of the corporate strategy office, visits the chairman in the hospital regularly to check on his health.

The chairman suffered a heart attack and collapsed on May 10 and received CPR at Soon Chung Hyang University Hospital in Hannam-dong, central Seoul. He was transferred to Samsung Medical Center in Irwom-dong, southern Seoul, where he had heart surgery to insert a stent to maintain the flow of blood to his heart.

According to Samsung Group, Lee came out of a coma 15 days after the surgery and was moved out of the intensive care unit.

Jay Y. Lee, vice chairman of Samsung Electronics and the heir-apparent of Chairman Lee, returned to Korea on Aug. 10 after a 12-day business trip to the United States and Europe.