‘Supercars’ are getting stellar sales in Korea

‘Supercars’ are getting stellar sales in Korea

The California T retails for 278 million won ($272,000). With add-ons the price can spike up to equal that of a new apartment in Seoul. According to the company, it has sold a decent number of the California T through preorders, though it did not give details.

During a launch event at the museum, Giuseppe Cattaneo, head of Ferrari Far East, said that Korea has reached an economic level where many people can afford Ferraris and that the company will focus on increasing its customers here.

High performance vehicles such as the California T, also known as supercars, have been gaining major sales momentum recently. Supercars have the performance of a race car with a maximum speed exceeding 300 kilometers per hour but can be driven on ordinary roads.

The industry estimates that more than 20,000 supercars are sold globally each year. The number does not vary greatly because in order to maintain the rarity of the vehicle, manufacturers only produce a limited number of each model.

Ferrari, a leading supercar maker, only produces 7,000 units a year.

It is expected that this year, at least 100 Ferrari supercars will be purchased in Korea.

The local industry estimates that in addition to Ferraris, about 30 Italian Lamborghini supercars are sold in Korea each year.

It is rumored that preorders for Huracan in Korea, which Lamborghini released last month, were higher than expected despite the retail price of 371 million won.

According to Lamborghini Seoul, preorders for its latest super car were more than its overall sales for last year.

As high performance supercars enjoy exceptional sales, other supercar brands are gearing up to expand in Korea. 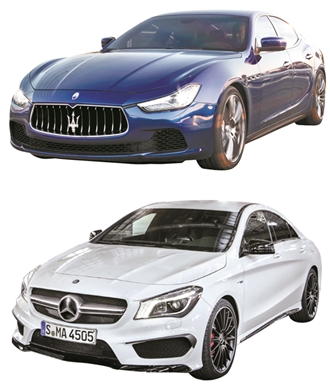 British supercar brand McLaren is reportedly planning to introduce a new model here before the year is over.

Marketing campaigns targeting Korean customers are heating up as well.

The goal was to raise brand awareness for potential consumers and Ferrari recently decided to open new service centers in Budang, Gyeonggi, and Busan.

As the number of supercar owners increases, their desire to share their common interest by starting clubs is growing too.

The most well-known of these communities is the Ferrari Owners Club Korea, started last year. The prerequisite for joining the community is that you must own at least one Ferrari.

But who’s buying these pricey high performance vehicles? According to FMK, most of the buyers are wealthy entrepreneurs. But with the launch of the slightly more affordable California T, their customer base has expanded to high-end professionals such as lawyers and doctors. About 70 percent of supercar owners are estimated to be in their 40s and 50s and only 10 percent are in their 20s or 30s, while those aged 60 or older account for nearly 20 percent.

Another notable attribute of the buyers is that most live in Gangnam.

“Those who own a Ferrari just don’t settle for one supercar but they actually own several,” said an FMK official. “These are people who have a unique love for cars and speed.

“Recently, it seems the age group purchasing these super cars is becoming younger,” the official added.

The industry speculates the recent brisk sales of luxury sedans is largely because Koreans are spending more and consumers tend to have a strong preference for products that are rare or unusual.

According to the Italian luxury car maker Maserati, it sold 280 units in the first half of this year after selling 120 units in all of 2013.

Umberto Maria Cini, Maserati’s managing director for Asia-Pacific, said the Korean market is showing the fastest growth in the region and has become a major market for the automaker.

He added that by sales, Korea ranks 10th among the 70 countries in which Maserati does business.

Other high-end luxury brands are also seeing strong sales in Korea, one of which is Bentley, which has sold 176 units in the first seventh months. That’s a nearly 135 percent surge compared to the same period last year.

Its sales this year are the best since Bentley entered the Korean market in 2006.

Porsche this year devoted itself to the local market by setting up a direct branch office in Korea instead of selling through importers. The recent trend of expanding high-end imported cars in the local market drew the attention of the automakers’ headquarters in Germany.

In the first seven months of this year, Porsche sold 1,524 units, nearly 75 percent of the 2,041 units that the automaker sold last year.

The company plans to further expand its sales by promoting 12 new models, including the sports utility vehicle Macan, which it started selling here in May.

The sales target it has set for itself is 2,600 units. Mercedes Benz is promoting its high-performance cars such as the E-Class. The automaker up until last month sold 19,991 units, up 40 percent compared to the same period last year.