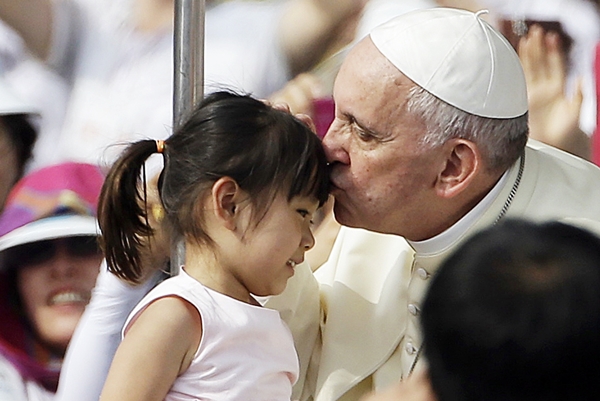 Pope Francis kisses a girl as he arrives to celebrate a Mass for the beatification of 124 martyrs at Gwanghwamun Plaza in Seoul on Saturday. [AP/NEWSIS]

A rapturous crowd of up to one million people packed Gwanghwamun Square, central Seoul, on Saturday for a historic beatification Mass led by Pope Francis, with applause and cheers ringing out across the plaza.

The open-air mass dedicated to beatifying 124 Korean martyrs came on the third day of the pontiff’s visit to Korea and was billed as the most anticipated event. It’s extremely rare for the pope to preside over a beatification Mass in a foreign country.

Beatification - the third out of four steps in the Catholic Church’s process of canonization - is a religious rite, but for the crowds pouring into central Seoul to see the pope, the Mass came across as more of a national event. Police estimated the number of attendees to be one million.

The crowd was larger than any event at the 2002 World Cup co-hosted with Japan.

Before the ceremony began, Pope Francis reached out to the public through a parade in his popemobile. Hundreds of thousands of people - both Catholics and non-Catholics - chanted “papa” as he passed.

The pope occasionally stopped his car to kiss the young. The pope also stopped the car to talk to Kim Young-oh, whose daughter perished in the Sewol ferry in April.

Kim has been on a hunger strike for more than a month to press the government and ruling party to pass a law to enable an independent investigation into the tragic event.

The grieving father told the pope, “Please, never forget the Sewol ferry disaster” and kissed his hand. Kim also gave the pontiff a letter in a yellow envelope. Alongside Kim, some 400 other relatives of Sewol victims gathered at the event.

Father Federico Lombardi, director of the Holy See Press Office in the Vatican, said that the encounter was not planned.

“It was not something planned or scheduled,” said Lombardi. “Whenever the pope comes across someone who needs help and consolation, he would just approach and meet them.”

Pope Francis then proceeded to the Mass.

The martyrs, including Paul Yun Ji-chung, are among the earliest Catholics who were killed for their faith in the 18th and 19th centuries. That was a time when the kingdom of the Joseon Dynasty (1392-1910) suppressed Catholic clergy and believers because the church didn’t approve of ancestral worship and conflicted with some Confucian principles and practices.

It was the poignant moment for many Catholics to see the martyrs recognized.

Dressed in red vestments, the pope praised the sacrifices of the faithful.

“They were willing to make great sacrifices and let themselves be stripped of whatever kept them from Christ - possessions and land, prestige and honor - for they knew that Christ alone was their true treasure,’’ Pope Francis said during the Mass.

“They challenge us to think about what, if anything, we ourselves would be willing to die for.’’

The pope also urged believers to be wary of the allure of wealth and secular desires and stick with their faith.

Hundreds of thousands turn out Saturday for one of the highlights of Pope Francis’ trip to South Korea: the beatification of 124 Koreans martyrs. [NEWS1]

“So often we today can find our faith challenged by the world, and in countless ways we are asked to compromise our faith, to water down the radical demands of the Gospel and to conform to the spirit of this age,” he said.

“Yet the martyrs call out to us to put Christ first and to see all else in this world in relation to him and his eternal Kingdom.”

The pope’s message appeared to strike a chord and have broad appeal as a number of non-Catholics joined the Mass.

“We’ve seen a series of disastrous events including the ferry disaster,” said Choi Hee-young, a 36-year-old woman who identified herself as non-Catholic, who lives in Nowon District, northern Seoul.

“It was really heart-breaking. But when you look at politics, things are getting worse with politicians wrangling for their own gains rather than trying to fix problems,” Choi said.

“But whenever I hear the words of the pope, it really makes me feel good and touches my heart. So, this is why I came here to listen to the words in person.”

Some participants arrived at the plaza hours or even a day before to get good places.

“I come from Daejeon,” said Park Kyung-Cheol, a 46-year-old who came with his family. “It’s a once-in-a-lifetime opportunity to see the pope.”

Following the Mass, the pope visited Kkottongnae, a Catholic rehabilitation center for the sick and disabled in Eumseong, North Chungcheong.

Yesterday, the Catholic leader met with bishops from around Asia. He later offered a closing Mass for Asian Youth Day, a religious gathering for young faithful.

Pope Francis wraps up his visit today with a Mass at Myeongdong Cathedral in central Seoul.