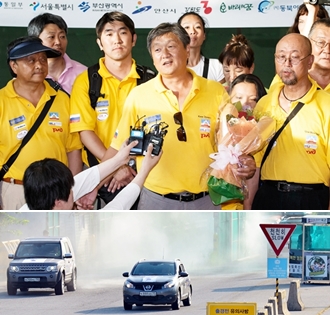 Top, a group of ethnic Koreans speak to reporters at Paju, Gyeonggi, after driving from Russia and through North Korea to the South on Saturday, a 16,000-kilometer (9,941-mile) auto rally marking the 150th year since the first batch of Koreans emigrated to Russia. Bottom, the group of 33 Korean-Russians arrives in five SUVs at the customs office in Paju after departing from Moscow on July 7, passing through Central Asian countries and North Korea to promote peace and restoring relations between the two Koreas, according to the organizers. Today, they will participate in a Mass for peace and reconciliation led by Pope Francis at Myeongdong Cathedral in central Seoul. [NEWSIS]