KFA reboots its quest for a new coach

KFA reboots its quest for a new coach 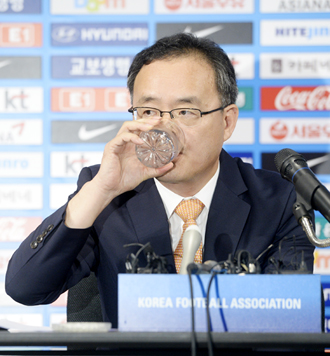 The Korean coaching staff will manage the national team’s two friendly matches in September since the Taegeuk Warriors still don’t have a head coach after negotiations with Dutchman Bert van Marwijk broke down over the past weekend, according to the Korea Football Association (KFA).

In a press briefing yesterday at KFA headquarters in Jongno District, central Seoul, the governing body’s technical committee chief, Lee Yong-soo, explained the failed talks with 62-year-old Marwijk, then presented a plan to manage the team for the months ahead.

“As our press release said on Sunday, the negotiation with Marwijk to land him in Korea broke down,” Lee said. “Like many media outlets reported over the weekend, the two biggest concerns were the tax issue on his salary and the duration of his stay in Korea. We received his answer on Saturday, but it wasn’t the answer we expected. Now we have to find a new person, as we haven’t been speaking with anyone but Marwijk.”

When the deal fell through, the media reported that Marwijk thought the tax on his salary was too high. The organization didn’t say how much it had offered, but sources said the Dutchman would receive about 2 billion won ($1.96 million) per year.

The other concern was the amount of time Marwijk would spend in Korea. The KFA wanted the coach to be in Korea so he could study the domestic league, but Marwijk wanted to stay in Europe as much as possible to be near his family.

Regarding possible alternatives to the Dutchman, Lee said the options were limited.

“We heard that the candidates who were our second and third option have already found new homes. Unlike in Marwijk’s situation, we will negotiate with at least two candidates simultaneously this time. The biggest concern for us is whether the candidate is willing to lead Korea with passion and is ready to devote himself to improving the country’s football.”

Lee also said that the KFA has hired former Seongnam FC Coach Shin Tae-yong as part of the national team’s coaching staff. He said Shin will manage the friendly matches against Venezuela (Sept. 5) and Uruguay (Sept. 8) along with two other staff members, Park Geon-ha and Kim Bong-soo, who worked for former Coach Hong Myung-bo in the 2014 Brazil World Cup, in which Korea was eliminated in the first round.

“Let me make it clear,” the technical committee chief said. “Shin is neither hired as the head coach nor is he a possible candidate for the post because we failed to bring in [Marwijk]. He will be an assistant coach for the new coach. We will find a new foreign coach for sure, as our determination to hire a foreigner for the post is still very strong.

“We hired Shin because he has the experience of running a K-League club, which the new coach should know about well but [they’re] hard to study in a short period of time. I think having at least one Korean coach on the national team will be helpful for the new coach no matter who that will be.”

Lee added that the status of Kim and Park is flexible.

“The contract for the two still hasn’t expired,” Lee said. “The new coach can build up his coaching team when he comes in, but Shin will still be working for the new coach.”

Lee added that the KFA will call up 14 players from overseas for the September matches. Bundesliga players Son Heung-min (Bayer Leverkusen) and Koo Ja-cheol (FC Mainz 05) were called up with two players in English leagues, Ki Sung-yueng (Swansea City) and Lee Chung-yong (Bolton Wanderers) along with 10 players in Japanese, the Middle East and Chinese leagues. The final roster for the friendlies will be announced Monday.