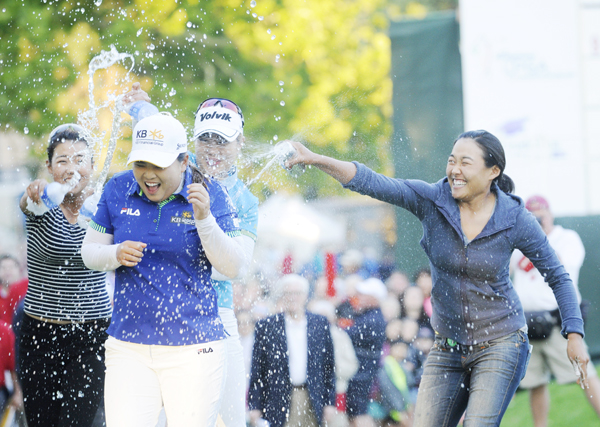 Jenny Shin, from left, Lee Mee-na and Lee Ill-hee spray winner Park In-bee at the Wegmans LPGA Championship Sunday in Pittsford, New York. It was the last LPGA Championship for the Rochester area, which has hosted the tournament for 38 years. Next year it moves to Westchester Country Club near New York City. [AP/NEWSIS]

Park In-bee of Korea defended her Wegmans LPGA Championship title on Sunday by making par on the first hole of a playoff against Brittany Lincicome at Monroe Golf Club in Pittsford, New York.

It was the 26-year-old’s first major victory of the 2014-15 season and the fifth of her career. She became the first to successfully defend the LPGA Championship since Annika Sorenstam won three in a row from 2003-05, and only the third player to win back-to-back titles in Rochester, matching Nancy Lopez (1980-81) and Patty Sheehan (1989-90).

Both Park and Lincicome finished with an 11-under 277.

On the par-four 18th hole, Park hit her second shot into the rough behind the hole, while Lincicome hit her approach shot to the left fringe, nearly identical to her position on the final hole of regulation when she made a bogey.

In the playoff, Park saved par by holing a one-meter (3.2-foot) putt, while Lincicome missed from 1.8 meters away.

It was her 11th LPGA win overall and second this season. By taking home the $337,500 first prize, Park became the third-leading money winner on the tour, passing 17-year-old Lydia Ko of New Zealand who finished third at 8 under.

“I have been trying very hard to win a major tournament,” Park said. “I’m extremely happy that I won this tournament. I was able to win this one because I made good putts on the 17th and 18th holes in the final round.”

Park also recalled her disappointing experience at the 2014 Ricoh Women’s British Open Championship in July, where she fell short in her quest to achieve the elusive grand slam. She was the leader after the third round, but finished fourth after shooting a five-over 77 in the final round.

“It was hard to forget about the British Open, because I really thought at the time that I would achieve the grand slam, which was my only goal of the season,” said Park. “But I shook off the memories and tried to win the Wegmans, as I have also been trying to win a major.”

There had been four major events in the season and all were won by Americans. Lexi Thompson began the run at Kraft Nabisco, then Michelle Wie won the U.S. Women’s Open and Mo Martin the Women’s British Open.

“Silent assassin” Park displayed her usual calm play and accurate putting. She sank a 20-foot birdie putt at No. 4, while Lincicome made a mess of the par-five 12th hole with two duffed chips, which was her first bogey on a par five in the entire tournament. With a birdie at 12 by Park, Lincicome’s lead was just one.

On the 17th hole, Park put her second shot 20 feet from the cup and nailed the birdie putt, while Lincicome’s 25-foot birdie attempt was an inch short. Her par save on the 18th with a 12-foot putt was neat and clean, adding to the pressure on Lincicome.

Suzanne Pettersen of Norway, who has won two major tournaments overall, started the day one shot behind Lincicome, but finished the tournament tied for sixth with Stacy Lewis, Julieta Granada, Shanshan Feng and Lee Mi-rim as she shot four-over 76 in the final round.