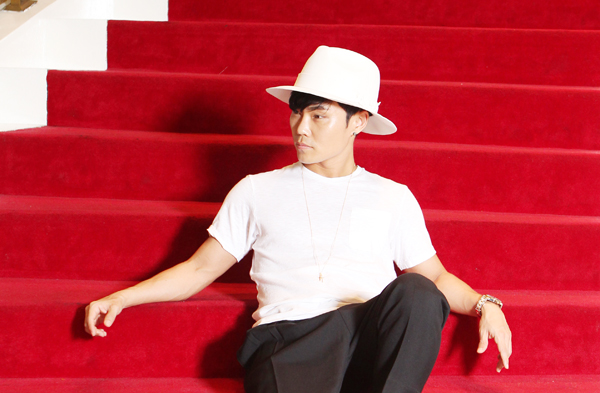 Singer Kim Bum-soo has had a completely new life since March 2011, following his participation in the MBC entertainment show “I’m A Singer.”

On the program, in which local artists compete each week to continue on to the next round, Kim was almost immediately embraced by viewers.

However, that wasn’t always the case. The singer’s album sales dipped shortly after his debut in 1999, which resulted in his agency asking him to stay away from television so his fans could focus solely on his voice.

Since the show, though, it has been hard not to notice Kim, who’s been in the business now for more than a decade.

Although he found competing with other professional singers to be greatly rewarding, the new challenges each week gave him a chance to match his face to his voice.

The veteran singer is even slated to join the country’s popular audition program “Superstar K6,” on cable channel Mnet, to share what he knows about music and the industry.

“I couldn’t just pass them by when they believed that I could give valuable commentary,” Kim said in a recent interview with Ilgan Sports, an affiliate of the Korea JoongAng Daily. During the talk, he also opened up about his career in music since his early debut.

Q. How do you like the idea of being a judge on an audition program?

A. Before, I thought I would never be a judge on any audition program because I think it’s absurd that I should be evaluating [someone else’s] music. In fact, I was getting offers for season three, but I kept saying no.

What changed your mind?

Recently, I received a lot of messages on social media sites from people asking if I could review their songs. I feel touched. These people are trying to grab anything they can. I couldn’t just not do anything. I wanted to give them advice.

Let’s go back to “I’m A Singer.” Do you feel you were destined to be on the show?

By taking part in that show, I was able to get my face out to the world. [Before I joined the show], I was active in the scene, but I was becoming further removed. I was going downhill. For the first time, I was worrying, how am I going to survive? Then the offer for the program came in.

Did you say yes right away?

I wasn’t thinking about joining an entertainment show. I was persuaded by the chief producer. She was very confident. She said the show would be a big hit and that it was key to have [me] on the show. I didn’t understand why the chief of the entertainment department ... was coming to me and asking me for a favor. When I went into the meeting, I said no, but on my way out, I was saying yes.

Do you think you benefitted the most from the show?

Yes, because I was the least known, I was the most relaxed. I could do whatever I wanted to do on the program. I arranged songs as I liked them.

It is like CPR. I was dying, but I came back to life.

Don’t you think such sudden popularity has changed you in any way?

Yes, the popularity worked as a poison and a medicine. Some of my life values, and passion for music - which I never thought I could give up - were fading. One day, I looked at myself and I realized I had become the type of conceited celebrity I detest. I’m in the process of putting things down.

What can we expect from your new album?

I haven’t had time to work on new songs since “I’m A Singer.” I got even busier afterward. I thought doing a concert was a good way to thank fans for showing their support. I did every type of performance I wanted for about three years. I did big ones, small ones and even did some performances overseas. The new album I’m planning on releasing sometime before my October concert. I’m done selecting songs for the eighth album. Please put your hopes up.