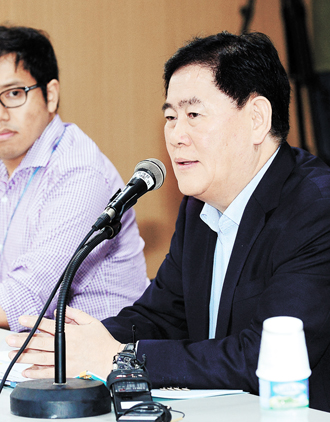 Choi Kyung-hwan, deputy prime minister for the economy and finance minister, is receiving mixed grades from the market for his performance since he took control of economic policy on July 16.

At a senior-level meeting yesterday morning in Sejong, Choi said he had a very “hectic” first month pursing recovery for major economic players. Even though the Korean economy was expected to post its strongest growth in the past three years, negative sentiment has been spreading since the Sewol ferry tragedy.

As soon as he took office last month, Choi focused on increasing a sense of urgency in the market and the government by saying, “The economy is in a more serious situation than expected.”

Analysts give good marks to Choi’s efforts to boost market sentiment by announcing a series of fiscal and financial measures. The stock market rallied more than 3 percent over the past month and the frozen property market started to thaw. But they caution that Choi’s list of policy measures shouldn’t grow indefinitely.

In a survey by the JoongAng Ilbo reviewing Choi’s first month, 10 analysts said Choi’s measures have been effective in thawing the frozen real estate and stock markets.

The minister earlier highlighted the economy is all about sentiment and he has managed to move that sentiment.

“It is creditable that the minister renewed the market atmosphere in a short time,” said Park Jong-kyu, a research fellow at the Korea Institute of Finance.

“His efforts are meaningful in that market sentiment has been restored,” said Shin Dong-jun, chief strategist at Hana Daetoo Securities.

The analysts said Choi is more active in the execution of policies than his predecessors.

But they question some policy measures Choi announced, including the controversial easing of the debt-to-income (DTI) and loan-to-value (LTV) ratios and taxation on corporation’s internal savings.

As for the DTI and LTV easing, many analysts are divided over the need for deregulation, mainly due to worries about the country’s household debt problem.

“The government’s decision was reasonable in that it adjusted the mortgage ceilings in accordance with debtors’ financial abilities compared to previous limits by age and region,” said Lee Jun-hyup, a research fellow at the Hyundai Research Institute.

The property market came back from the dead in response to the government’s easing of regulations on mortgages.

According to the Ministry of Land, Infrastructure and Transport, property transactions last month surged 94 percent compared to a year earlier to total nearly 770,000. This was a sharp turnaround from a 43.7 percent plunge the previous month.

On the other hand, some economists expressed renewed concern about the household debt issue.

“By easing the DTI and LTV, there are possibilities of aggravating the problem,” said Kim Jung-sik, an economics professor at Yonsei University.

The surveyed analysts showed more divisions over Choi’s idea of taxing internal savings of businesses to encourage them to pay dividends rather than sit on piles of cash.

“The measure is highly likely to lead to a contraction of business management and operations,” said Kim of Yonsei. “In the long run, it may only have adverse side effects.”

Some analysts questioned whether the plan would be effective at all.

As for a plan to stimulate the services sector by relaxing regulations on six major service industries including medicine and tourism, many of the analysts were skeptical, saying they wanted to see more specific plans.

“Rather than listing a number of policy measures like products displayed at a department store, it is crucial that the government be clear about priorities with each measure,” said Ohn Ki-un, an economics professor at Soongsil University.

“As for development of the services sector, the first priority should be persuading interest groups in each industry,” said Shin of Hana Daetoo.

For long-term growth, the analysts and scholars pointed out the government will need to deal with problems involving contract or non-salaried workers.

Choi emphasized the need to deal with irregular workers as well as small merchants in his inauguration speech on July 16.