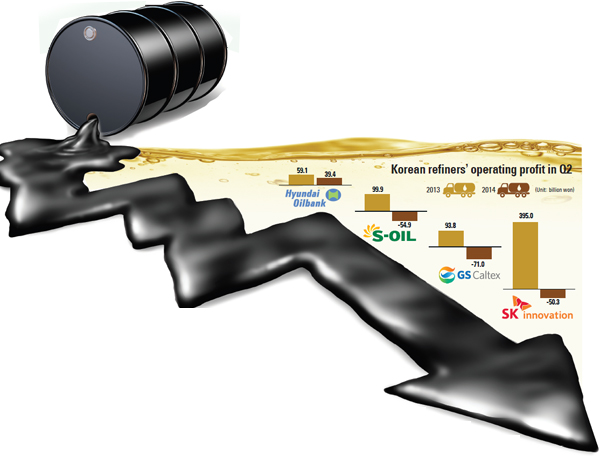 Korean refiners suffered a painful second quarter due to a reduced refining margin and a strong Korean won as they pushed to reduce marketing costs to survive.

Among the top four Korean refiners, Hyundai Oilbank was the only company that made an operating profit in its second quarter. The rest fell into the red compared to a year ago.

“The basic profit of refiners is affected by the refining margin, the spread of paraxylene [PX] and lubricant base oil,” said Hana Daetoo Securities researcher Lee Han-eol in his report. “It is inevitable that their second-quarter performance would be worse because of the currency rate change and the crude oil price change.”

The performance of Hyundai Oilbank, which avoided operating loss, wasn’t impressive. The affiliate of Hyundai Heavy Industries said last week that it had an operating profit of 39.4 billion won ($38 million) in the second quarter, down 33 percent from a year ago and a 61.9 percent decline from the first quarter.

But the nation’s smallest refiner fared better than others.

No. 1 refiner SK Innovation, the holding company that manages SK Group’s oil and petrochemical businesses, said last month it had an operating loss of 50.3 billion won in the second quarter. That number is 445.3 billion won less than in the same period last year, and a 276 billion won drop from the first quarter. Its second-quarter revenue slipped 2.1 percent year-on-year to 16.4 trillion won.

“Their poor performance is due to heavy losses in the refining business, which was marred by a weakened refining margin and seasonal maintenance,” said Shinhan Investment & Securities researcher Lee Eung-ju in a report. “The slump in the petrochemical business with the drop of the PX margin also didn’t help.”

According to Lee, the refining margin in the second quarter was $7.3 per barrel, down $1 from the previous quarter, while the spread between PX and naphtha declined $38 quarter-to-quarter to $288.

In refining, the top three oil companies had a combined operating loss of 541.7 billion won. For petrochemicals, none of the four companies recorded a loss, but their profits shrank.

SK Innovation said that its petrochemical affiliate SK Global Chemical had an operating profit of 51 billion won in the second quarter, down 77.2 percent down from a year ago.

GS Caltex reported that its operating profit in the petrochemical business slipped 78.4 percent year-on-year to 37.8 billion won, while S-Oil said that it had 26 billion won of operating profit, down 76.2 percent from a year ago.

What kept these three companies alive was their lubricant business last quarter. Industry insiders said that demand for lubricants has been increasing since 2009, because it is used in other machinery besides automobile engines.

SK Innovation said that its affiliate SK Lubricants posted an operating profit of 79.4 billion won in the second quarter, a 179.1 percent surge year-on-year. Its operating profit ratio was 10.2 percent.

GS Caltex reported 63.4 billion won of operating profit for its lubricant business from April to June, up 23 percent from year ago, while S-Oil had 72.5 billion won, a 46 percent increase from a year earlier. Their operating profit margin was 13.3 percent and 14.2 percent, respectively.

To offset heavy losses, refiners are reducing their marketing costs. They stopped using top celebrities in television ads and some companies even reduced customer service benefits.

According to the industry, SK Energy reduced benefits in May for its OK Cashbag - an SK Group customer loyalty program that gives points for purchasing products. Previously, customers who had an OK Cashbag membership card or a credit card with the OK Cashbag logo could earn five membership points per liter, but now their points will be set at 0.1 percent of the actual fuel cost, which reduces the benefits by 60 percent.

Industry insiders say the companies can rebound in the second half as the refining margin in crude oil and PX will improve. 